Start a Wiki
watch 01:50
The Loop (TV)
Do you like this video?
Gretchen Miller, aka Linda French (Crystal Lowe), is a villainess from the 2015 Hallmark film, The Gourmet Detective: A Healthy Place to Die, the second film of the Gourmet Detective film series (airdate August 2, 2015).

Six years prior to the film's events, Linda French and her husband, Bob Smith, were business partners with fellow chef Edward Taylor at a restaurant in England. However, Edward kept making passes at Linda, ignoring Linda's protests and the fact that she was married to Bob. Linda decided to poison Edward's water bottle with eye drops, planning to make him sick; however, she poured an immense amount into the bottle, and Edward ended up fatally succumbing to the poison while jogging.

The couple became suspects in Edward's murder due to the fact that they inherited the business, and that Linda's prints were on the bottle. Linda and Bob quickly left England and took jobs as chefs at a luxury resort spa, doing so under the names Gretchen and Lucas Miller. The couple was hired by the spa's owner, Evelynn De Witt (who Lucas was also having an affair with), under the pretense that they worked for a wealthy couple in Colorado. For years, Gretchen covered up her murderous actions, as did Lucas, but in the film's events, magazine reporter Kathleen Evans began digging into the couple's past, leading to Lucas killing her to keep her quiet.

Henry Ross and Detective Maggie Price were attendants at the spa in the film (the former as a guest speaker and the latter on a forced vacation), and once Kathleen was murdered, suspicion fell on many other attendees, including actress Danielle Stark, whose career took a hit after Kathleen published a video of Danielle lashing out at her subordinates. Evelynn became a suspect after Maggie caught her and Lucas making out, which revealed their affair, and it was also rumored (but not confirmed) that she may have killed her husband for his wealth. However, Evelynn was the near victim of a murder attempt, as she was poisoned with eye drops.

After taking a small sample of Evelynn's drink, Henry pointed out that it was laced with tetrahydrozoline, a chemical in eye drops, and that method ended up revealing the Millers' secret. Henry and Maggie did a search on the drug, which led to them finding a report on Edward's death as well as photos of the Millers under their real names: Bob Smith and Linda French. Meanwhile, the evil Gretchen made her plans to escape, but she was spotted down in the basement by Maggie and Henry, who ended up held at gunpoint by Lucas.

It was at that moment that Gretchen revealed everything: that she was the one who killed Edward, and that she did so because Edward kept making advances towards her. The villainess claimed that her plan was to make him sick, and the murder led to them becoming fugitives after they were suspected. Lucas later took Maggie and tied up both Gretchen and Henry, only for Henry to free himself and save Maggie, while Gretchen pleaded to be released. After Lucas was thwarted and subdued, both he and Gretchen were arrested. 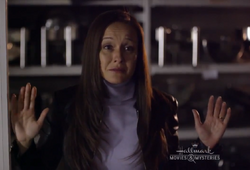 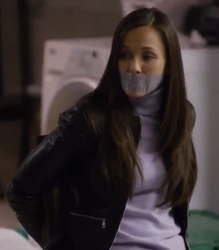 Gretchen tied up and gagged
Add a photo to this gallery
Retrieved from "https://femalevillains.fandom.com/wiki/Gretchen_Miller_(The_Gourmet_Detective:_A_Healthy_Place_To_Die)?oldid=173506"
Community content is available under CC-BY-SA unless otherwise noted.