Start a Wiki
watch 01:50
The Loop (TV)
Do you like this video?
Greta Krausser is the primary antagonist of the 1978 Italian war comic "Guerra #2: L'Affondamento del Lusitania". She was created by Carmelo Gozzo (story) and Esteban Polls (artist).

Greta is an undercover spy for the Germans in the year 1915. Upon boarding the RMS Lusitania, she seduces and then murders one of the ship's crew members, in order to steal his cabin keys. Once obtaining them, she locates and steals secret documents between the United States and Great Britain, which she plans to hand over to the Kaiser.

A couple happen to spot Greta's suspicious behavior as she attempts to leave the ship. They tie her up and interrogate her, but shortly after, a torpedo hits the side of the vessel and it begins to sink. The impact knocks the male unconcious, while also enabling Greta to break free of her ropes. She incapacitates the woman and takes her with, with intentions of torturing her later. Once safely off of the ship, the spy swims towards the nearest lifeboat and forces all of the passengers off of it and into the water, save for two rowers.

She instructs the men to take her out to a spot where a German submarine will be waiting for her. Once there, she kills the the rowers, prompting the now-conscious captive to murder her for all that she's done. 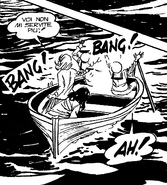 Retrieved from "https://femalevillains.fandom.com/wiki/Greta_Krausser_(Guerra)?oldid=208170"
Community content is available under CC-BY-SA unless otherwise noted.