Start a Wiki
watch 01:51
The Loop (TV)
Do you like this video?
Greta (Dyanne Thorne 1943-2020) was the main villainess in the 1977 sexploitation horror film "Wanda, the Wicked Warden".  The movie was originally released as "Greta the Mad Butcher" and in 1979 was changed to "Ilsa, the Wicked Warden" based on Dyanne Thorne's very similar character portrayal in the Ilsa movies.  The film is often though of as the third of four series of Ilsa movies eventhough Ilsa plays different characters in different time periods, and meets violent deaths in all of them.

Greta is in charge of Los Palomas, a mental hospital located in South America, exclusively for women suffering from "sexual deviances".

A girl named Abbie (Tania Busseller) goes undercover as a patient to find out what happened to her sister Rosa.  She is soon stripped and hosed down and given a uniform.  Abbie soon meets Juana (Lina Romay) who is the lead bad girl inmate, and pet of Greta.  Juana has more freedom than others in the facility.

In the end, the patients uprise and capture Greta.  They pin her down on a bed and begin ripping her flesh with their bare hands and teeth.  We see and hear lions doing the job the inmates partake in, and it is obvious that Greta is devoured. 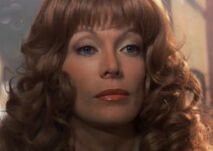 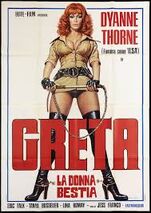 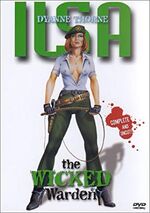 Add a photo to this gallery
Retrieved from "https://femalevillains.fandom.com/wiki/Greta_(Wanda,_the_Wicked_Warden)?oldid=194627"
Community content is available under CC-BY-SA unless otherwise noted.