Start a Wiki
watch 01:51
The Loop (TV)
Do you like this video?
Greta is a villainess in the 1972 adaptation of

Greta is friends with Ellie, a millionaire’s daughter who ran off with the chauffeur, Michael. The couple live in an expensive and futuristic house on Gipsy’s Acre, built from Ellie’s inheritance by a mysterious architect that Michael got to know from a job in his former life. Ellie relies greatly on Greta to sort out all sorts of things; in fact, she is basically running her life, and Ellie praises her repeatedly for being very ‘efficient’. After Ellie had a riding accident, Greta comes to live with them, much to Michael’s displeasure. He doesn’t like how she takes decisions on Ellie’s, and his, behalf, and how she intrudes into their marriage. Michael and Greta have a nasty argument in front of party guests, after which Greta purports to leave the married couple alone. Realising that Ellie is very distressed about this, Michael reluctantly makes up with Greta.

While Michael is away on a business trip, Ellie is found dead in the woods after she went out riding again. As this is the second incident of the sort, no-one suspects a suspicious death, but we soon learn that Michael and Greta have been planning the marriage to the wealthy heiress and Ellie’s death all along. Michael returns to the mansion to find Greta there. On the road up, he believes to see Ellie, but he shakes off any thoughts as Greta receives him in what is now their opulent property. The revealed villainess has adopted a new demeanour: her sober style has been replaced by that of a true femme fatale, and she now wears her red hair openly. The two lovers can finally drop their masks of the mourning husband and friend, and reunite in lustful passion as they roll naked over the floor. After they slaked their greedy lust, the evil couple celebrate their victory with champagne. In the course of the evening, Michael gets second thoughts. A picture in the mail that shows Greta and himself together proves that someone is aware of their murderous conspiracy. Michael panics and accuses Greta of being to blame for him losing everything now: Gipsy’s Acre, the house – and Ellie. The self-assured Greta tells him to pull himself together and sleep off his silly doubts. Michael, who is probably mentally unstable, loses his nerve and attacks Greta. After chasing the terrified villainess around the living room, he finally catches her and pins her down. Greta screams and squeals in horror and frees herself once more, only to be cornered after a second chase, with no chance to escape and no-one there to help her now. Her death is off-screen, but we can assume that Michael strangles his ex-lover and accomplice.

In the following scene, Michael sits lazily on a revolving chair at the indoor swimming pool. He has the negligee previously worn by Greta lying over his lap, suggesting that he undressed her after killing her. He looks down on the dead villainess'  naked body floating face down in the pool. Michael then uses a remote control to close the lid upon her, thereby showing his contempt for his former mistress. Although Michael will be brought to justice and sentenced to death at the end of the movie, it is the evil Greta who has probably met the more gruesome punishment for their betrayal and crimes. 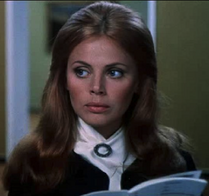 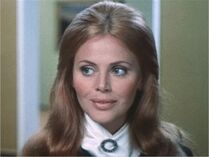 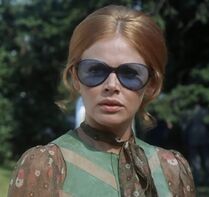 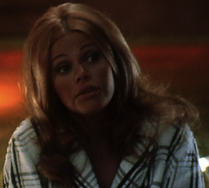 Add a photo to this gallery
Retrieved from "https://femalevillains.fandom.com/wiki/Greta_(Endless_Night)?oldid=110214"
Community content is available under CC-BY-SA unless otherwise noted.