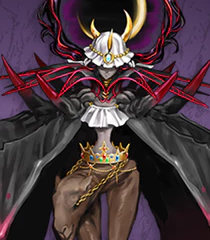 Gremory (グレモリー) is the primary antagonist and final boss in the 2018 action platformer game "Bloodstained: Curse of the Moon" (ブラッドステインド:カース・オブ・ザ・ムーン) as well as a major enemy in its 2019 sequel "Bloodstained: Ritual of the Night" (ブラッドステインド:リチュアル・オブ・ザ・ナイト) by developer ArtPlay.

Description from the Kickstarter page: The 56th demon in Solomon’s grimoire. A demon with the status of a duke, also known as the goddess of the moon. Summoned by Gebel, this demon oversees one portion of the castle. She is capable of creating portals into different dimensions; once there, she can harness the power of the moon and use it to attack her enemies, firing endless crescent moon knives at her opponents. She also has a devastating gravity attack that's generated by power of the lacquer-black moon.

Retrieved from "https://femalevillains.fandom.com/wiki/Gremory_(Bloodstained)?oldid=168965"
Community content is available under CC-BY-SA unless otherwise noted.