Grace Wheeler (Janet Leigh; 1927-2004) is the main villainess from Columbo's fifth season opener, "Forgotten Lady" (airdate September 14, 1975). She is an aging film and dance star and the wife of retired doctor Henry Willis.

In the episode, Grace had firmly decided on a comeback, feeling that she still could be as famous as she was years ago. She informed her husband of her plans, which included Henry funding the comeback, asking for $500,000 to do so. Henry flatly refused, kindly telling Grace that her days of acting are behind her. Not wanting to take no for an answer, Grace decided to eliminate Henry, as (in her mind) he was an obstacle in her goal.

One night, while routinely playing one of her classic films, Grace went to her car and took her gun out of the glove compartment. While the movie was playing, the villainess removed her garb, revealing an all black bodysuit and putting on a pair of gloves, and later took the gun while entering Henry's room. Later on, the evil Grace placed the gun in Henry's right hand and pulled the trigger, killing him and making it appear that he committed suicide. She also placed a medical file on his body to set up the scene, and she later returned to the viewing room to watch her film.

Columbo was put on the case and had questioned Grace on more than one occasion, with Grace continuing the ruse by stating that her husband shot himself, while using her routine as her alibi. However, Columbo noticed a time discrepancy surrounding the length of the film, and used that in the episode's climax to expose Grace as a villainess. He set up the film to break when it played during a gathering at the home, due to the fact that the film actually broke on the night of the murder. Grace committed the murder during a 15 minute period which saw the film break (11 minutes) and Grace fixing it (4 minutes). As a result, the film was made to appear that it was two hours long instead of the actual length: one hour and 45 minutes.

Not only did Columbo inform this to Ned Diamond, a fellow actor and Grace's frequent dance partner, he also informed Ned that Grace had a degenerative brain disease, and that was the reason why Henry wouldn't fund her comeback. Any stress could kill her and Grace was on borrowed time--two months (at the most) according to Columbo. It was also stated that the disease affected her memory--she could remember things from years past but not anything that happened recently, and that included killing her husband. At that moment, Grace overheard Ned and Columbo conversing and loudly insisted that her husband committed suicide, but just as Columbo was about to reveal the entire truth, Ned cut him off and falsely confessed to killing Henry, doing so to protect the woman he had always loved. Columbo took Ned into custody (with both of them knowing that Grace will have most likely passed on by the time he's cleared), leaving Grace to watch the film and become lost in the past. 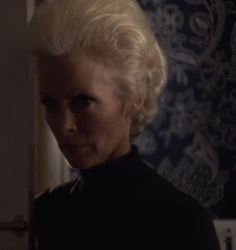 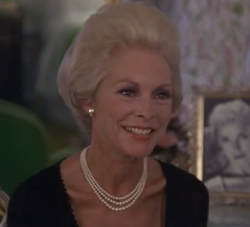 Add a photo to this gallery
Retrieved from "https://femalevillains.fandom.com/wiki/Grace_Wheeler_(Columbo)?oldid=110104"
Community content is available under CC-BY-SA unless otherwise noted.