Start a Wiki
watch 01:24
The Loop (TV)
Do you like this video?
Grace Ballard (Gemma Arterton), born Grace Butler, is the hidden main villainess of the 2019 film Murder Mystery.

Grace was a British actress, and she was first seen on the family yacht of her billionaire ex-boyfriend, Charles Cavendish. Also aboard the yacht were Cavendish's ex-fiancée Suzi Nakamura, his cousin Tobey Quince, Colonel Ulenga, his bodyguard Sergei, the Maharaja Vikram of Mumbai, race car driver Juan Carlos Rivera, and their host Malcolm Quince (Cavendish's uncle). Furthermore, the film's protagonists—NYPD officer Nick Spitz and his hairdresser wife Audrey—joined Charles as his two last-minute invites.

During dinner, Quince announced that Suzi (his soon-to-be-wife) will be the only one to receive his inheritance, believing that the others feigned interest in him because of his money. However, before he could sign his new will, the lights went out and came back on to reveal that Malcolm was stabbed to death by his own dagger. After he was turned to for guidance, Nick ordered the room locked and for the other guests to return to their rooms. Later that night, the guests found Tobey—Quince's only son—dead from an apparent suicide. Upon arriving in Monte Carlo, said guests were questioned by Inspector Laurent de la Croix, who quickly believed that Nick and Audrey were the culprits.

At the Monaco Grand Prix, the two protagonists questioned their fellow guests, and that night, Sergei summoned them to his room. There, he revealed that Quince had married Ulenga's fiancée while he was in a coma, which ended with her death and an allegedly stillborn baby. The couple then hid when someone knocked on Sergei's door, and came out to find that he had been shot three times, quickly resulting in his demise. The next day, Nick followed Suzi to a library where he reunited with Audrey, who revealed that Charles was in the building as well. This made them realize Cavendish and Nakamura were still in love, which led the pair to believe that they were the murderers. After that, the couple fled from a hidden gunman and met Rivera before being confronted by Suzi, who was accidentally killed by the masked killer. Nick and Audrey then went to Quince's mansion to confront Cavendish, only to find that he had already perished from a poisoned drink.

The couple summoned Inspector de la Croix, Ulenga, Grace, Vikram, and Rivera to the mansion, with the last four of the five having alibis. Nick revealed that he called his NYPD partner to look up the death certificates of Quince's late wife and "son," only for there to be one for just the wife. The revelation made him realize that there was no death certificate because there was no death for that child, with Ulenga disclosing that Malcolm would never abandon a son. Audrey deduced that the supposed son was actually an unwanted daughter that Quince disowned since he only wanted boys.

With this information, the protagonists deduced that Grace masterminded the murders; her first accomplice Tobey killed Malcolm before she killed the male former herself by shooting him in his head. After Juan became the villainess' second accomplice (because he blamed Quince for an accident in which his father lost both of his legs), the latter went about trying to frame the Spitzs by ordering the former to shoot Sergei dead, seemingly attempted to get intimate with the race car driver in order to create an alibi for herself, accidentally shot Suzi in her neck during one of her several attempts on the couple's lives, and had Juan poison Charles' drink—knowing he wouldn't rest until he found out who killed Suzi.

Grace began to confirm the couple's suspicions by revealing that she was Quince's "deceased" child and that his money truly belonged to her, but denied the accusations that had just been made against her. Inspector de la Croix then asked what other proof they had before going on to state that they needed evidence to make an arrest, much to the Spitzs' dismay. As Ballard attempted to leave, however, Audrey demanded she take off her hat. The greedy woman refused to do so, stating that Juan bought it for her. The female protagonist voiced that she remembered how the masked killer was hit on their head earlier, which would have injured them. She also inquired why Ballard would wear a hat after getting her hair done, and when the latter asked the former how she knew about it, Nick responded that it was because she is a hairdresser.

Inspector de la Croix also demanded that Ballard remove her hat, and when she refused once again, he forcefully took it off himself, and when Grace turned around to try getting it back, the implicating injury on her forehead was seen by everyone else present, cementing her reveal. Realizing she had been caught, the villainess took out a gun, with Juan's "attempt" to "stop" Ballard ending in her striking him with her weapon. She then took Audrey hostage, but Nick grabbed Ulenga's gun and shot Grace in her right arm even though he was aiming for one of her feet, causing her to let go of the female protagonist and fall to the floor unconscious. Ballard was taken by paramedics to a nearby hospital before being arrested offscreen for her actions. 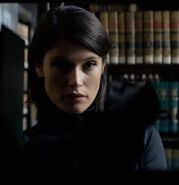 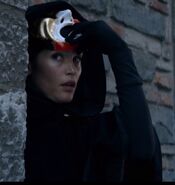 Grace near the scene of Suzi's murder
Add a photo to this gallery
Retrieved from "https://femalevillains.fandom.com/wiki/Grace_Ballard_(Murder_Mystery)?oldid=173251"
Community content is available under CC-BY-SA unless otherwise noted.