The Female Villains Wiki
Register
Don't have an account?
Sign In
Advertisement
in: 2000s, Blonde, Bully,
and 18 more

The Go-Rock Squad is a villainous team from Pokemon Ranger with a loose musical theme, lead by Gordor and his four children (Tiffany, Clyde, Garrett, and Billy). They use evil capture stylus's (used by the Pokemon Rangers to befriend wild Pokemon) to capture and enslave wild and owned Pokemon. They're based in the Fiore Region.

They have short blonde hair and golden sunglasses.

The Go-Rock Squad grunts are featured in the manga Mobilize!! Pokemon Ranger, which is, unfortunately, not translated into English. Based on the context, we can assume that she is brainwashing Pokemon owned by various trainers in Fiore to be used for evil purposes. 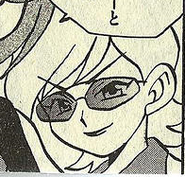 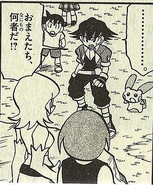 Being confronted by the Pokemon Ranger.

Go-Rock Squad sicks their mindless pets onto the hero.

Villainously watching as the hero struggles to capture the Pokemon. 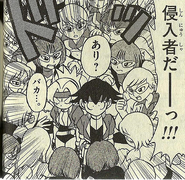 The rangers are ambushed!! 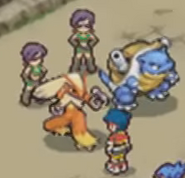