"Yes, Caesar...I am very prepared." – Glimmer, during her Interview

Glimmer (Leven Rambin) is the female tribute from District 1 during the 74th Annual Hunger Games. She is a Career, which means that she has been trained in survival and combat since childhood in preparation for the Games she will eventually volunteer for. Glimmer is arrogant, cunning––and deadly.

She is also very deceitful, as in the books she attempted to use poison in her ring to kill off other contestants before it had even begun! However, she is not shown to be particularly skilled at using a bow and arrow. Glimmer is from District One, the richest district.

Glimmer stabs a female tribute to death during the Cornucopia Bloodbath and gains a bow & arrow.

Glimmer and the rest of the Careers chase Katniss into the woods and chase her up a tree. Glimmer tries to shoot Katniss with her bow but she misses badly. At a standstill, they all fall asleep at the base of the tree. Glimmer cuddles with Cato.

Katniss sees that Rue is in a tree nearby, and Rue points out a Tracker Jacker nest nearby. Katniss takes her knife and cuts it down, sending the deadly hornets down on the Careers. Glimmer begins to scream. In the commotion, Glimmer trips and falls. The Careers all abandon her, including Cato. Unwisely, she wastes more time gathering her bow and arrow, ensuring her demise. But by the time she gets up to run, the powerful stings from the Tracker Jackers are too much to overcome. Flailing against the hornets, she falls to the ground and soon succumbs to their genetically-engineered venom.

She is the first of the Careers to die.

Katniss strips her bow and arrow from her corpse and runs away, fearing the surviving Career pack near. 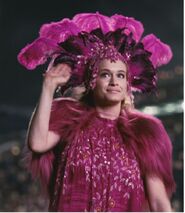 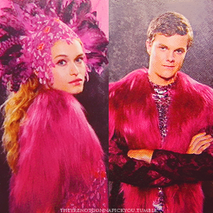 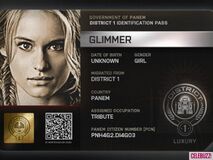 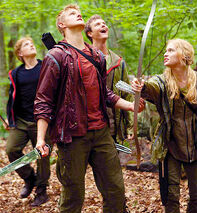 Add a photo to this gallery
Retrieved from "https://femalevillains.fandom.com/wiki/Glimmer_(The_Hunger_Games)?oldid=204285"
Community content is available under CC-BY-SA unless otherwise noted.