Start a Wiki
watch 01:24
The Loop (TV)
Do you like this video?
Ginger "Tracker" Morgan (Sandahl Bergman) is the main villainess from "Prime Cut," episode 2.15 of Freddy's Nightmares (airdate January 21, 1990). She served as the villainess of what was later revealed as a series a nightmares from main protagonist Johnny Travers, which occurred in the first half of the episode.

Staying true to her nickname, Ginger Morgan was introduced as a tracker during a business camping trip involving Johnny and his friends, Jake Hopchick and Todd Lawrence. As the trip progressed, Johnny noticed strange attributes from Ginger that led him to suspect that she may be a vampire, beginning with Ginger cleaning a wound by sucking the blood off, as well as revealing an aversion to wooden stakes--under the claim that one killed her husband. Johnny voiced his concerns to Ginger while she was brushing her teeth, but he was quickly put at ease.

However, Ginger turned heel when she was shown flashing vampire fangs and a sinister smirk as Johnny walked past her, and she later charmed Jake and Todd (especially the latter) with her flirtatious demeanor. Later that evening, however, Johnny spots Ginger with Jake, having tied him to the rocks, and witnessed her biting Jake and feeding on him, cementing Ginger's villainous turn. The villainess later swooped towards Johnny, who wakes up from that sequence and tells Todd about his suspicions about Ginger being a vampiress. Todd dismisses Johnny's statements, but on the following day (in broad daylight), Ginger emerged under her heel persona and continued feeding on Jake, which was witnessed by Johnny.

Sensing Johnny's presence, the evil Ginger pursued Johnny and held him by the throat before revealing that she wanted Johnny to be with her--even attempting to seduce Johnny into helping her finish off Todd, who was held captive. Johnny turned down Ginger's advances and held her at bay with his cross. Johnny saved Todd, only to wake up and realize that everything was a nightmare, as he was actually the survivor of a plane crash that killed his friends. As Johnny screamed, he saw a vision of Ginger as a vampiress swooping down on him before the real Ginger woke him up. 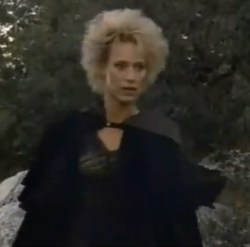 Ginger's appearance as a vampiress 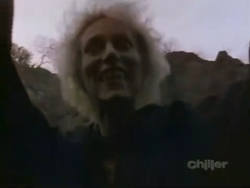 Vampiress Ginger swooping down on Johnny
Add a photo to this gallery
Retrieved from "https://femalevillains.fandom.com/wiki/Ginger_%22Tracker%22_Morgan_(Freddy%27s_Nightmares)?oldid=169168"
Community content is available under CC-BY-SA unless otherwise noted.