Start a Wiki
watch 01:48
The Loop (TV)
Do you like this video?
Gillian "Gilly" White (Sian Gibson) is the villainess of "Written in Murder", episode 7.03 of BBC's Death in Paradise (airdate January 18, 2018). She was the assistant and protege to author Frank O'Toole, initially meeting him while she was working at a bookstore in England. Gilly ended up falling in love with Frank, so much so that she accepted Frank's invitation to work as his assistant and live with him and his wife Valerie in Saint Marie, despite being engaged to marry her bookstore's manager, Dean Shanks.

Gilly's infatuation with Frank increased over the course of her employment with him, and when Frank told her he wanted to take her to Prague on a research trip, Gilly saw the invitation as Frank reciprocating her feelings. Later on, Gilly was sent to Montserrat by Frank and Valerie, only for Gilly to stay on the island without their knowledge, at which point Gilly learned a shocking secret: Frank and Valerie to planning to fake Frank's death, doing so as a means of revigerating his book sales in light of their financial problems.

Gilly learned about Frank's plot after looking through his laptop and, enraged at Frank's rejection of her feelings, Gilly plotted to kill him. Learning that Frank was planning on swimming out to a boat he had set up in the sea to go to his established hideout, the evil Gilly went ahead of him and surprised Frank on his boat, stabbing him to death with a knife before setting the boat adrift. Earlier in the evening, Gilly faked becoming drunk at a gathering with Frank and Valerie, setting it up to look like she would be incapable of killing Frank. Over the course of their investigation, DI Jack Mooney and Florence Cassell uncovered Frank's plan to fake his death, as well as how Gilly had discovered the plan and killed Frank.

Jack gathered the suspects together for his summation, with Gilly becoming shocked at seeing Dean in attendance and callously telling him he shouldn't have come. Jack then went on to reveal Gilly as Frank's killer, revealing how she had torn up the book he'd signed for her after learning about his plan with Valerie. Gilly attempted to claim Jack had no proof, only for Jack to reveal how paint matching the one used on the boat was found under Frank's fingernails and how he was certain Gilly left DNA on the boat during her attack on Frank. As Gilly was placed under arrest, Valerie blasted her for killing Frank after all he'd done for her, to which Gilly accused Frank and Valerie of deceiving and using her. After Valerie told Gilly that Frank felt nothing for that and denounced her as a monster, Gilly was taken away by Officer JP Hooper. 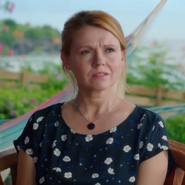 Gilly's villainous reveal
Add a photo to this gallery
Retrieved from "https://femalevillains.fandom.com/wiki/Gilly_White_(Death_in_Paradise)?oldid=99803"
Community content is available under CC-BY-SA unless otherwise noted.