Gertrude Avery is the villainess of "The Machiavellian Candidate", case #49 of Criminal Case: Mysteries of the Past, the 4th season of the crime solving game Criminal Case (release date October 26, 2017). She was the stepmother of Lissa Avery, the assistant to Senator Malcolm Rochester.

When Lissa was found dead at a luncheon Malcolm was attending as a guest of honor, Gertrude was revealed as Lissa's stepmother after she was found raving in the park about her death, claiming she was her daughter. When questioned by the player and Maddie O'Malley, Gertrude expressed heartbreak at Lissa's death, describing her as a exceptionally kind person and denouncing the political world she was involved with through her career. She continued to express sorrow for Lissa's death, even when Maddie and the player discovered her birth certificate and found that Gertrude wasn't her biological mother.

But ultimately, Gertrude's grieving was revealed to be a mask for her true nature as a greedy villainess. Following her husband Frederic's death, Gertrude was enraged to learn that Frederic had left his entire fortune to Lissa, with Gertrude only getting whatever money Lissa allowed her to have. Realizing that she would only receive Frederic's money when Lissa died, the evil Gertrude plotted to kill her stepdaughter. Gertrude went about doing so during the luncheon, poisoning Lissa's wine with the medical cyanide she had begun using to treat her diabetes in hopes that her murder would be blamed on one of the politicians in attendance.

Gertrude left traces of pinstripe fabric on the box of cyanide she used to poison Lissa, which she'd tried to dispose of, along with the glass Lissa had drunk the poisoned wine from. This (among other clues) led to Gertrude being revealed as her stepdaughter's killer and she was brought in for interrogation. After initially continuing to feign innocence, Gertrude angrily confessed to murdering Lissa, revealing that she had never liked Lissa and was angry that she'd inherited all of her late husband's money and only allowed her a small portion of it (implying that Gertrude had solely married Frederic for his wealth). Gertrude also claimed that she had initially tried to act nice to Lissa to convince her to give her more money, but resorted to poisoning her when that failed to change Lissa's mind. Gertrude was arrested and put on trial, where Judge Satoshi Takakura sentenced Gertrude to twenty-five years in prison, to which the villainess bemoaned that she would never get to enjoy her wealth. 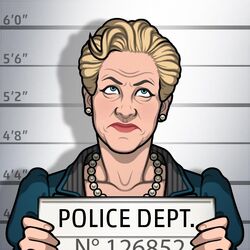 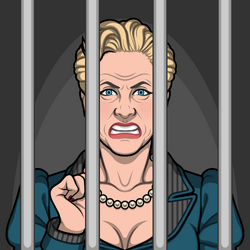 Add a photo to this gallery
Retrieved from "https://femalevillains.fandom.com/wiki/Gertrude_Avery_(Criminal_Case)?oldid=147455"
Community content is available under CC-BY-SA unless otherwise noted.