Start a Wiki
watch 01:48
The Loop (TV)
Do you like this video?
Gerda Scharff (Michele Carey) plays the secondary antagonist in the 1967 episode "The Night of the Feathered Fury" for the TV series "The Wild Wild West".

We first see Gerda at the beginning of the episode, where she is introduced to James T. West (Robert Conrad) and Artemus Gordon (Ross Martin) as a former member of the villainous Count Manzeppi's organization.  She wants to trade information for protection.  She wishes to escape the evil clutches of her former master, and the agents are skeptical of her sincerity.  The meeting is soon interrupted by the sound of an organ grinder outside and a performing monkey who enteres through a window.  West notices that the organ gridner is actually Count Manzeppi (Victor Buono) in disquize, and at that moment, the small monkey sets off an explosive device.  After the explosion, Gerda is gone and a toy chicken is all that is left behind.  A complicated game of cat and mouse ensues involving Gerda, Count Manzeppi and the agents, all of them after the toy chicken, or more precisely, what the chicken contains.

Gerda is a smoky voiced femme fatale, who doesn't have any alegiance at all.  She next appears in West's car cabin wearing his robe and her hair held up above her head with a towel.  She claims she had to take a bath to get the plaster from the explosion out of her hair.  She attempts to seduce him, and when West calls her on this act, she slips off the robe revealing she was fully dressed in a red dress and holding a small pistol.  After removing West's fire arm from him, she threw it out of the window of the moving train.  She demands West to hand over the toy chicken, which he claims is in the vault of Col. Armstrong (Oliver McGowan).  About this time, Manzeppi showed up along with Dodo and Luther Coyle (George Murdock), the Count's henchmen.  Luther used a toy to relieve Gerda of her gun.  After a struggle between Luther and West and then also with Dodo, Gerda is allowed to leave. Later West vists Scharff's Toy shop and finds the body of Gerda uncle [who made the toy] and encounters Count Manzeppi and his two henchmen; before he is captured West manages to hide the chicken toy; West learns that the chicken contains the fabled Philospher's Stone. This is a red rock that was used by alchemists to transform any metal into gold, and also allowed you to live forever through an elixir of life. The toy had been commissioned by Manzeppi to hide the stone; Gerda and her Uncle stole the stone and chicken from him and he wants them both back.

Later we see Gerda use her pistol on Gordon, who is disguised as the organ grinder. Gordon knocks out the two henchmen in the toy shop and goes to free West and retrive the toy. Gerda then accompanies Manzeppi as he obtains the toy chicken from West and Gordon.  Manzeppi is wearing gloves, so is unaffected by the power of the stone. Gerda then uses her pistol on her former boss to obtain the stone.  Knowing what would happen next, he obliges her request. He warns her she cannot escape. Gerda takes the toy chicken and runs out of the room.  Manzeppi escapes and West and Gordon go chasing after him.  They hear Gerda scream, and they soon find the lovely Gerda lying on the roof.  She has been turned into gold after being hit by the moonlight.  Manzeppi is standing over her, andhe mocks that the agents didn't believe in the stone's existence. He then performs black magic spell a large explosion took place and when the smoke dissappaited, she and the stone has been disintegrated into 24 carat gold leaf which blows away.  The only other thing remaining is her small pistol which has also been turned to gold which also explodes.

Manzeppi once again makes his escape, and Gordon and West are entertaining two ladies in their cabin.  They show Gerda's remains (24 carat gold leaf) to the ladies.  After leaving it on the table, the food caterer woman (Georgia Schmidt) comes by cleaning the table.  She opens the curtains letting in the light of the full moon outside.  Suddenly, the gold turns into a toy bird.  The lady is seen gathering up the toy and putting it in her pocket to take home for her son to play with... 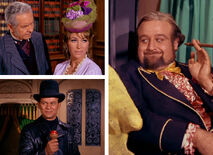 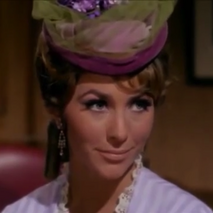 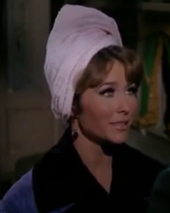 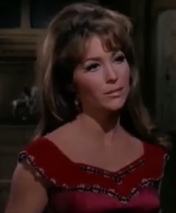 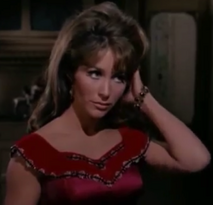 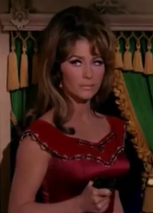 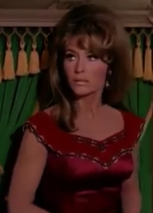 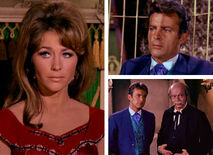 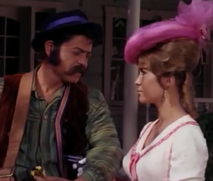 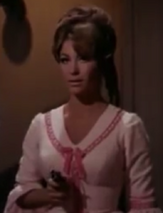 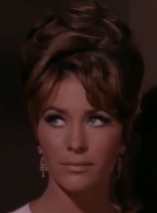 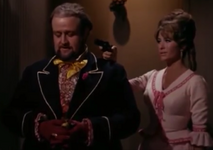 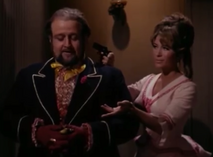 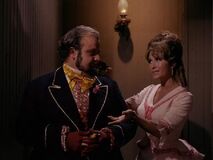 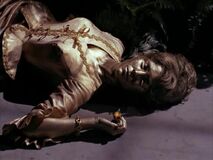 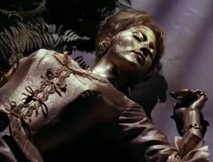 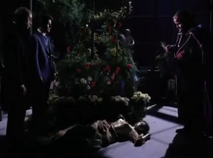 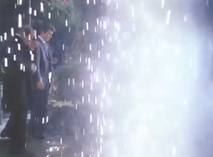 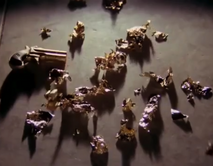 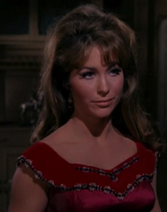 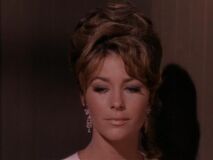 Add a photo to this gallery
Retrieved from "https://femalevillains.fandom.com/wiki/Gerda_Scharff_(The_Wild_Wild_West)?oldid=179611"
Community content is available under CC-BY-SA unless otherwise noted.