Start a Wiki
watch 01:51
The Loop (TV)
Do you like this video?
Gerda (Jenny Runacre) is a character in the 1973 Paul Newman movie, The MacKintosh Man.

Gerda is a henchwoman for the main villain, Brown (Michael Hordern). She is one of Rearden's (Paul Newman) jailers and keeps him prisoner at a remote country house. Her role wouldn't be that interesting if it wasn't for the punishment she deals out to Rearden during an interrogation. During the questioning she wears some very chunky, heavy and lethal-looking 70s high heels and uses them on Rearden to good effect. First she kicks him in the balls, dropping him to the floor, then she kicks him in the shoulder, sending him flying across the room. Then Rearden is thrown towards her and she kicks him across the chest, sending him to the ground. Then she walks around to his front and pulls him up by his hair, finally delivering a knock-out kick to the head with her chunky high heels.

She appears to be a sadist as shown by the grin on her face before she kicks Rearden in the balls. She also smiles as she watches Rearden getting beaten by two men. It is clear that she thoroughly enjoys both inflicting and watching pain. In the end Rearden repaid her in kind. She runs up the stairs and Rearden steps out and snaps a kick to her crotch. She yelps in pain as she drops to her knees. Rearden clips her jaw with a pistol, knocking her out. She presumably dies as Rearden escapes and the house they were in burns to the ground. 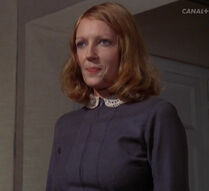 Gerda anticipating her next kick

Gerda about to kick Rearden in the balls

Gerda's kick to the balls

Gerda's kick/knee to the chest.

Gerda's kick/knee to the chest again.

Gerda pulling him up by the hair for the final kick

Gerda kicking Rearden in the head

The evil Gerda dominates Rearden with her deadly legs

Add a photo to this gallery
Retrieved from "https://femalevillains.fandom.com/wiki/Gerda_(The_MacKintosh_Man)?oldid=125970"
Community content is available under CC-BY-SA unless otherwise noted.