General Fang (Karen Mok) is the secondary antagonist from Disney's 2004 film, Around the World in 80 Days. She was introduced as the main antagonist, but this was a misinformation campaign to hide the true main villain.

General Fang is first seen mysteriously entering the Royal Academy of Science after hearing Lord Kelvin deciding to inform her that if the Jade Buddha, which was stolen by her from her enemy, Lau Xing's village in exchange for British military assistance from Kelvin to conquer Lanzhou, isn't returned to the Bank of England, then they have no deal. General Fang reminds Kelvin that because heragents delivered the Jade Buddha to the bank, she has a right to be concerned about anything that happens while it's in British hands. She is informed that nothing else was taken from the bank, and then berates Kelvin: "My agents will retrieve the Jade Buddha once again, Lord Kelvin. This time, do not let it slip through your fingers." which causes him to throw a quill at her only for her to catch it swiftly with her fan and then, throw it back at his portrait with a dagger as well.

Later on, when Lau Xing and his new friend, Phileas Fogg travel around the world in 80 days; starting with Paris, Fang orders and sends some of her Black Scorpion agents to retrieve the Jade Buddha and kill Lau Xing, but to no avail.

In Agra, India, some of her agents; including a hulking chained agent and a female assassin try again to accomplish the mission only to end in failure yet again.

In Lanzhou, China, her army of Black Scorpion soldiers along with their second-in-command leader are defeated by Lau Xing and his brothers(and sister)-in-arms, the Ten Tigers of Canton and forced to retreat and never return to Lanzhou again.

In England, at the Royal Academy, General Fang offers Lord Kelvin jade reserves in Lanzhou instead in return for some military assistance but Lord Kelvin states that if Fogg wins the bet by successfully traveling the world in 80 days, he won't have the power to do it, so, Fang decides to deal with the problem herself and Kelvin agrees to her more generous offer.

Finally, in New York, General Fang and her remaining minions have Lau Xing, Phileas Fogg, and their French friend, Monique La Roche ambushed in a warehouse where the Americans have started building the Statue of Liberty; thanks to a dirty cop. All her minions are defeated and now Fang is left to fight Lau Xing alone. As the book of the Statue is about to fall on them, Fogg returns to help but it's too late. By a miracle, Lau Xing emerges out unharmed and just as he and Fogg are making amends, Fang emerges as well and gains to have at them with a sword, only be knocked out by Monique.

General Fang is last heard sending a telegram to Lord Kelvin back at the Royal Academy telling him that their deal is off.

It is unknown what happened to her and the Black Scorpions after Kelvin was exposed and arrested for his crimes. It is possible that she still can use the untapped jade reserves to make deal with UK's rival countries like Spain, France, German or Russia to get her a powerful army one way or another since this is also a period that China is becoming a giant cake for superpowers to slide a piece. 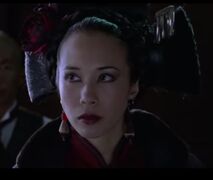 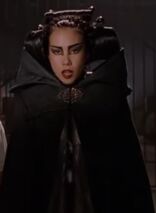 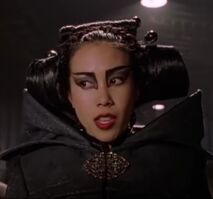 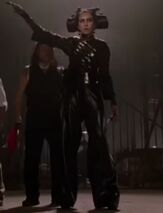 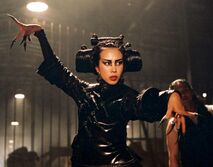 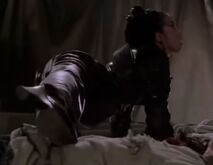 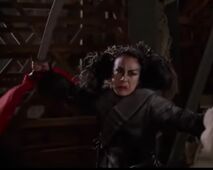 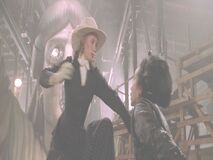 Add a photo to this gallery
Retrieved from "https://femalevillains.fandom.com/wiki/General_Fang_(Around_The_World_In_80_Days)?oldid=184832"
Community content is available under CC-BY-SA unless otherwise noted.