Start a Wiki
watch 04:10
The Loop (TV)
Do you like this video?
Gayle Janaway (Maureen Anderman) is the hidden main villainess from "Baby, It's You," a two-part crossover episode of Law & Order (episode 8.06; airdate November 12, 1997) and Homicide:  Life on the Street (episode 6.05; airdate November 14, 1997). She is the wife of plastic surgeon Steven Janaway and the mother of teenage model Brittany Janaway.

Gayle and Steven were married for 21 years, but as the marriage progressed, there were problems, as Steven was also having and affair with his colleague, Andrea Plotkin--an affair that lasted 10 years. While it was indicated that Gayle had no knowledge of the affair, it was revealed that Gayle had harbored intense jealousy of her own daughter, Brittany. Gayle was very popular and had caught the attention of many boys, including and eventually Steven, but as Brittany grew up and blossomed, she saw how beautiful she became and developed jealousy over Steven (in her mind) paying more attention to Brittany and her modeling career than to Gayle.

Three years prior to the events, Gayle turned heel and raped Brittany, who was only 11 years of age at the time. The maniacal villainess committed her incestuous assault in a twisted way of lashing out at not only Brittany, but Steven as well. Gayle's actions led to Brittany being hospitalized due to internal bleeding, with Steven treating her and covering it up after realizing that his wife was the cause and had been molesting her. Even after the hospitalization, the evil Gayle continued her assaults on Brittany, with her latest act taking place in their Baltimore home. Gayle tore her daughter's vagina during the rape, causing Brittany to go into toxic shock and develop an infection that killed her, despite Steven's attempts to revive her.

Part 1 saw the Janaways interviewed about Brittany, with both of them fretting over their daughter's death. Her cause of death was revealed as being caused by rape later in the episode, and it was in the end of Part 1 and the beginning of Part 2 that Steven became a suspect, all the while, Gayle masked her heel persona and continued grieving for Brittany, while acting as a supporting wife for Steven. Part 2's climax revealed Steven's affair as an alibi, and it ended up with both halves interrogated separately. John Munch interrogated Gayle, who referred to herself as a good mother, but it was Steven who provided Gayle's reveal as a villainess, as he revealed that Gayle regularly raped Brittany and added that he believed he was guilty for not taking Brittany away from her. Regarding Gayle, she responded in agreement to Munch's statements regarding Steven being more attentive to Brittany than to her, revealing Gayle's jealousy. She also added that they "fought" a lot and stated that Steven was never around when she wanted to talk to him, and she broke down and pushed away Brittany's photos when she was asked if she raped her. Gayle was later booked and arrested for sexually assaulting and killing her daughter. 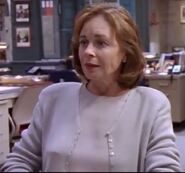 Gayle's appearance in the Homicide conclusion 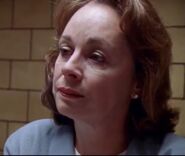 Gayle's reveal as a villainess 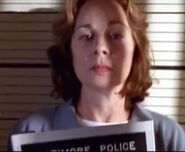 Gayle being booked
Add a photo to this gallery
Retrieved from "https://femalevillains.fandom.com/wiki/Gayle_Janaway_(Law_%26_Order)?oldid=199993"
Community content is available under CC-BY-SA unless otherwise noted.