The Female Villains Wiki
Register
Don't have an account?
Sign In
in: 2010s, Anime Villainess, Brunette,
and 8 more

Garie Tūmān is one of the four Autoscorers created by Carol Malus Dienheim in the animation Senki Zesshou Symphogear GX.

Ultramarine is her theme color.

Water Alchemy: As the Autoscorer of water, Garie has full mastery over the element of water in all its forms including solid, liquid, and gas. This means that her attacks as much more versatile than the other Autoscorers. She generally prefers to use ice to create sharp blades, increase her agility by skating on ice paths, or solidifying the water in air particles to use as a barrier for protection. When she attacks with water in the liquid form she generally uses it as a water jet to cut through and crush obstacles. She can even mix the use of both water and ice by firing freezing cold water and then solidifying it into a block of ice to create an icy tomb.

Illusion Master: Garie is able to alter the reflections off of water particles to produce optical illusions. She uses this to make Hibiki Tachibana see a fake Micha as well as using it to support herself in this manner when attacked directly. She can also use it to reflect mini versions of herself in water bubbles.

The Holy Grail: As Garie’s Tarot motif is cups she unlike the rest of the Autoscorer has the power of the Holy Grail inside of her. Like in legend where it can store infinite abundance she is able to store more memories from using her kiss, but also that she can transfer these memories to others effectively giving life to other Autoscorers. This is very important as Micha is unable to drain memories from others meaning that she absolutely needs Garie to transfer memories to her in order for her to function. 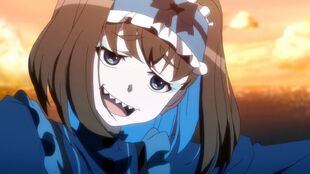 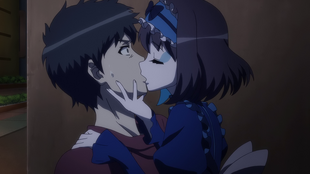 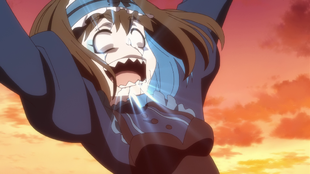