Start a Wiki
watch 01:48
The Loop (TV)
Do you like this video?
Gail Shaw (Lorraine Burroughs) is a villainess from "Good Morning Lemmings", episode 7.05 of New Tricks (airdate October 8, 2010).  She was the sole female member of a group of graffiti artists known as The Maze Crew. Another member of the crew was Danny Tyler, who was murdered four years prior to the episode's events.

The team began to re-investigate Danny's death after graffiti tags reading "I Killed Flak" (Flak being Danny's nickname as a graffiti artist) were discovered around London, with Gail being questioned by Brian Lane and Jack Halford. After begging the detectives not to let her past get exposed to her office, Gail revealed that she'd dated fellow Maze Crew member Kevin Humphreys before leaving him for Danny, causing a rift between Danny and Kevin. Gail also revealed how deeply in love with Danny she was, as well as how she admired his graffiti abilities.

Gail was later questioned again by Jack and Sandra Pullman, during which time it was revealed that she and Kevin were back together. Gail vehemently denied Sandra's belief that she cheated on Danny with Kevin, and claimed they were estranged from Maze Crew member Jason Bishop for being too "touchy". As the investigation continued, a secret of The Maze Crew was uncovered: in addition to graffiti, the group was also responsible for the robberies of several ATM machines in the area, with Kevin being arrested during another attempted robbery. Additionally, Jason revealed that Gail only valued Danny for his money, and was convinced by Kevin (who Jason described as having a hold over Gail) to collude with him in a plot to bilk Danny of his newfound wealth as a professional artist.

In the wake of Danny's murder, the greedy couple not only stole thousands from his bank account, but Gail additionally concocted a blackmail scheme against billionaire art collector David Bryant, who had been a supporter of Danny's work. Knowing Danny had went to meet David about a recent painting he'd done (one which subtly revealed Danny's knowledge of Gail and Kevin's treachery), Gail stole a photograph of the painting from the museum where it was held before David bought it and texted David using a burner cell phone, threatening to expose him if he didn't pay her off at a meeting. After the team learned about the blackmail scheme against David, they set out to capture the blackmailer at the meeting point, where a hoodied Gail was surrounded by officers.

Under interrogation, the evil Gail attempted to scapegoat Kevin for her crimes, claiming that he had been David's blackmailer and that she only went to the meeting place out of fear of what Kevin would do if she didn't get the money. Sandra, however, was quick to blast Gail's claims as false, stating that Gail manipulated Kevin into believing he had control over her when it was the other way around and dismissing Gail's desperate attempts to claim Kevin used and manipulated her. The damning evidence against Gail, however, was her fingerprint on the stolen photograph and the fact that the last blackmailing text sent to David was sent after Kevin's arrest. Finally exposed, Gail was arrested (off-screen) for her various crimes. 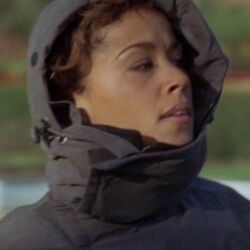 Gail during her arrest 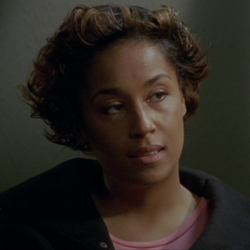 Gail during her interrogation
Add a photo to this gallery
Retrieved from "https://femalevillains.fandom.com/wiki/Gail_Shaw_(New_Tricks)?oldid=151122"
Community content is available under CC-BY-SA unless otherwise noted.