Start a Wiki
watch 01:38
The Loop (TV)
Do you like this video?
Gail Peterson (Christina Carlisi) is the main villainess from "American Nightmare," episode 12.04 of Supernatural (airdate November 3, 2016). She is the mother of the episode's main protagonist, Magda Peterson, a young girl with psychic abilities.

Sometime before the episode's events, Gail and Magda were arguing over the latter wanting a cell phone, with the argument occurring while Gail was driving. During the argument, Magda inadvertently jerked the steering wheel with her psychic powers, which caused an accident that damaged Gail's nerves and left her in constant pain. After learning that Magda somehow caused the accident telekinetically, Gail became a deranged and religious fanatic who believed that Magda was possessed by Lucifer. She took her family (Magda, husband Abraham, and son Elijah) off the grid and faked Magda's death--using a story that she had a deadly disease and refused doctors due to religious beliefs.

Gail locked Magda in her basement and forced her to whip herself repeatedly to get the Devil out of her, while forcing her to utter a prayer over and over. Magda's attempt to reach out to a woman named Olivia Sanchez and a delivery boy, Ricky Copeland, for help, but both ended up dying due to stigmata--causing her powers to force both into repeating the prayer that Gail forced her to say. Gail used the deaths as part of her continuous abuse towards Magda; callously blaming her daughter for the deaths when in actuality, Gail was responsible.

After Sam caught Gail's sadistic ritual with Magda, he was held at gunpoint by Elijah and knocked out by Abraham, and later tied up and taken into the basement with Magda. The episode's climax had Gail serving dinner to her family, all while dismissing Sam's factual claim that Magda is psychic and not possessed. Gail continued to state that Magda was evil and possessed, and after Abraham suddenly keeled over and died after eating, she revealed that she poisoned the dishes (including her own) so they could be together in heaven. Following Abraham's death, the evil Gail ordered Elijah to eat his meal, but Magda used her powers to prevent her brother from doing so. The psychotic villainess picked up a knife with intent to kill Magda, only for Elijah to stand in front of his sister and end up on the fatal receiving end of Gail's knife. Magda attempted to use her powers to send the knife towards her evil mother, but Sam pleaded with Magda not to. After being spared by Magda, Gail was arrested for her actions, and deliriously ranted that her daughter was the Devil as she was taken away by police.

Gail pointing her knife at Magda 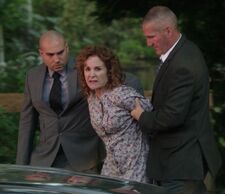 Gail's arrest
Add a photo to this gallery
Retrieved from "https://femalevillains.fandom.com/wiki/Gail_Peterson_(Supernatural)?oldid=144490"
Community content is available under CC-BY-SA unless otherwise noted.