Gail Kim is a retired professional wrestler and manager who competed in both WWE and TNA, having portrayed a villainess in both promotions.

Gail Kim is best known for her WWE debut on June 30, 2003, where she won the Women's Championship in a battle royal. A week after losing the title to Molly Holly, Gail became a villainess and attacked Trish Stratus, and then formed an alliance with the villainous Molly to take down Trish and the returning Lita. After Trish became a villainess herself at WrestleMania XX, Gail portrayed an evil henchwoman of sorts, up until her WWE departure later that year.

Gail began her first stint in TNA in 2005, serving as the villainous valet for America's Most Wanted, while also aligning with Jeff Jarrett. In her early years in TNA, Gail feuded with Jackie Gayda as well as Traci Brooks. Gail left TNA in 2008 and returned to WWE in 2009, but after competing as a babyface during that stretch, Gail returned to TNA once again as a villainess on October 20, 2011, attacking then-Knockouts Champion Velvet Sky. She formed an alliance with the evil Karen Jarrett, who was the Knockouts VP, as well as Madison Rayne, who Gail would capture the Knockouts Tag Team Championship with just two weeks after her return. At Victory Road in November 2011, Gail defeated Velvet to capture her second Knockouts Championship (her first title came at Bound For Glory 2007, where she became the first ever Knockouts Champion). In her reign, Gail feuded with Tara, Mickie James, and even her own partner, Madison Rayne, for a brief while. Gail's title reign ended at Slammiversary, when she lost the title to Brooke Tessmacher.

In January 2013, Gail began bullying Knockouts referee Taryn Terrell, with the feud coming to a head when Taryn stood up against Gail's bullying and attacked her, costing Gail the Knockouts Championship against Velvet Sky at Lockdown. Later in the event, the evil Gail attacked Taryn in a backstage segment. After Taryn became an in-ring competitor, the pair faced off in a memorable Last Knockout Standing match at Slammiversary, which Gail lost.

At Bound For Glory, Gail captured her third Knockouts Championship and formed an alliance with Lei'D Tapa. The pair bullied the entire Knockouts Division for months, until Madison Rayne returned from maternity leave and captured the Knockouts Championship from Gail in January 2014. Gail feuded with her former partner for the first two months of the year, leading to Gail losing to Madison in a title bout at Lockdown. Gail's alliance with Tapa ended after the enforcer inadvertently caused Gail to lose to the debuting Brittany on March 13. A week later, Gail defeated Tapa, ending Tapa's tenure in TNA. 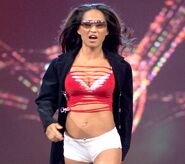 Gail Kim as Knockouts Champion and Knockouts Tag Team Champion
Add a photo to this gallery
Retrieved from "https://femalevillains.fandom.com/wiki/Gail_Kim_(WWE)?oldid=204993"
Community content is available under CC-BY-SA unless otherwise noted.