Start a Wiki
watch 01:48
The Loop (TV)
Do you like this video?
Gail Harper is the main villainess of "Apprehend Me If You're Able", case #39 of Criminal Case: Mysteries of the Past, the 4th season of the crime solving game Criminal Case (release date August 17, 2017). She was an exchange officer who was approached by the player and Maddie O'Malley in regards to the death of counterfeiter Jade Carnegie, as her fingerprints were found on a false passport of hers.

Gail initially claimed that her prints were most likely from when Jade came into her exchange office, while also expressing no knowledge of Jade's counterfeiting business. But later on, a photograph showed Gail and Jade together, proving that the women were friends when Jade was running her business in Spain. When confronted, Gail revealed that she was in fact friends with Jade at the time, but cut ties with her when she found out she was a counterfeiter.

But ultimately, the evidence revealed Gail as Jade's killer. As revealed by Gail during her confession, she had actually been persuaded by Jade to join her in her counterfeiting operation, replacing the money reserves at her exchange office with Jade's counterfeit bills. But eventually, Jade became impatient and began spending the counterfeit money, causing Gail to fear that the bills would be traced back to them and they would be caught. Desperate to cover her tracks, the evil Gail killed Jade by shooting her in the neck with a handgun, later disposing of the weapon in Wolf Park.

Gail also disposed of the chain for her pocket watch (which she had gotten Jade's blood on) in an ashtray at the park, with this being among the pieces of evidence leading ot Gail's villainous reveal. After failing to feign innocence when confronted with the evidence, Gail confessed to being Jade's accomplice and her killer, justifying her corrupt actions by pointing out how many people on Wolf Street got rich through shady dealings and that she had to stop Jade from getting them caught. Jade was ultimately sentenced by Judge Justin Lawson to twenty years in prison, to which the villainess bemoaned how her plan to be wealthy had failed. 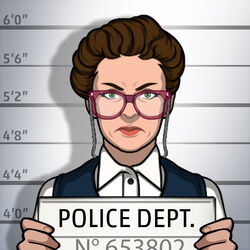 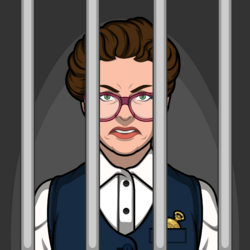 Add a photo to this gallery
Retrieved from "https://femalevillains.fandom.com/wiki/Gail_Harper_(Criminal_Case)?oldid=147109"
Community content is available under CC-BY-SA unless otherwise noted.