Fumiko Shiraishi (Yurika Hino) is the villainess of "Kogoro Gets Drunk in Satsuma", the 2-part Season 13 finale of Case Closed (airdates February 14 and 21, 2005). She was a former hospital nurse and the wife of Satoshi Shiraishi, the owner of the prominent Takakuma Brewery, which was famous for their hand-brewed shochu and sake.

The episode had Kogoro Mouri (along with his daughter Ran and Conan Edogawa) being invited to the brewery after appearing on a talk show regarding the local shochu, where they were greeted by Satoshi and Fumiko. They also were witnesses to the conflict between the brewery's managing director, Shinsuke Tatsumura, as he was planning to abandon the brewery's original process to instead begin mass producing their product for higher profits.

Fumiko (as well as the other employees) were adamantly against Shinsuke's plan, as it went against their deathbed promise to the company's previous owner (Satoshi's father) to continue handmaking their products after his passing. After learning that Shinsuke wanted Kogoro to become a celebrity spokesperson for Takakuma, Fumiko volunteered give him, Ran, and Conan a sightseeing tour, during which she pleaded with Kogoro not to accept his offer due to her disapproval of his plans. After returning to the brewery, Fumiko appeared horrified when she goes to Shinsuke's house and finds blood and a statue on the floor of the office. It initially appeared that Shinsuke had been kidnapped, but two days later, an anonymous caller led the police to Shinsuke's body, which was found in his car in the forest.

The fact that Shinsuke only had one house key that was impossible to duplicate revealed that someone he knew was the killer, and while Kogoro initially believed that visiting journalist Hitomi Maezono was the culprit, Conan deduced the truth: Fumiko had killed Shinsuke, and used the tour she gave Kogoro and company as part of falsifying her alibi. Before giving the tour, Fumiko called Shinsuke and lured him into meeting her in the forest, where she knocked him out with chloroform before drawing some of his blood with a syringe. With Shinsuke incapacitated, Fumiko used his keys to break into his house, turn on the lights, and leave the front door unlocked before going to pick up Kogoro and company for their tour. When Fumiko, Kogoro, Ran, and Conan returned to Shinsuke's house, Fumiko planted the blood on the ground and statue and ransacked the room to make it appear that Shinsuke had been attacked before the tour. After dropping Kogoro and company off at their hotel, the evil Fumiko returned to Shinsuke as he was beginning to wake up, using an identical statue to the one from his office to bludgeon him to death.

Needing to confuse the police regarding Shinsuke's time of death to complete her false alibi, Fumiko waited two days before anonymously calling the police to lead to Shinsuke's body. While her elaborate cover-up initially allowed her to avoid suspicions, Conan was able to uncover Fumiko's actions and impersonated Kogoro to reveal the truth. Eventually, Fumiko admitted to killing Shinsuke, with Conan revealing to her that he'd first suspected her when he learned of a checkup she had convinced Shinsuke to have recently--which she'd used to cover up taking Shinsuke's blood by making the injection in the same spot Shinsuke got during his appointment.

When asked by Ran why she killed Shinsuke, Fumiko revealed that she worried his plans for the company would make everyone greedy and not care about the quality of their product, responding to employee Daisuke Kosugi's argument that none of them were like that by revealing that she believed they would change in time under Shinsuke's plan. When Satoshi expressed remorse for not firing Shinsuke before, Fumiko expressed understanding with Satoshi's belief that he was in Shinsuke's debt for all he'd done for the brewery and revealed her desire to be "remembered" as the person who protected their business. After Conan deduced that Fumiko felt compelled to kill Shinsuke to repay the kindness shown to her by Satoshi's late father, Fumiko was arrested, encouraging her employees to continue their hard work in her absence as Satoshi promised to wait for her. 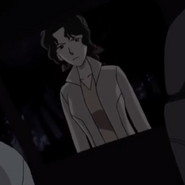 Fumiko as she prepared to kill Shinsuke 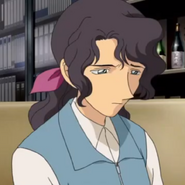 Fumiko during her villainous reveal
Add a photo to this gallery
Retrieved from "https://femalevillains.fandom.com/wiki/Fumiko_Shiraishi_(Case_Closed)?oldid=194491"
Community content is available under CC-BY-SA unless otherwise noted.