Start a Wiki
watch 01:24
The Loop (TV)
Do you like this video?
Frieda (Traudel Haas) is the main antagonist of the 2007 German animated film Happily N'Ever After. She is the stepmother of Ella and is voiced by Sigourney Weaver in the English dub.

Frieda gains access to the Wizard's lair during the Prince's ball. She manages to chase off Munk and Mambo and tip the scales of good and evil, causing a series of fairy tales to go wrong and have unhappy endings, including Jack getting stepped on by the Giant yet surviving, Rumpelstiltskin winning his bet with the miller's daughter and taking her baby, and the unseen demise of Little Red Riding Hood. She summons an army of trolls, witches, three Big Bad Wolves, the Giant, and Rumpelstiltskin to her castle.

Witches and trolls attack Ella and her friends. The Seven Dwarfs hold off the trolls, while they flee with the help of Rick who had stolen a flying broom. Frieda decides to go after Ella herself. She succeeds in capturing her and returns to the palace, with Rick, Munk and Mambo in pursuit. Frieda tortures Ella because if the story had run its course she would have married the prince while Frieda would never get anywhere in life. Rick, Munk, and Mambo slip into the castle and attack Frieda. During the fight, Frieda generates a pit in the floor. Mambo knocks her in, but she uses her staff to fly back up again. After a short battle, in which Rick takes a blast meant for Ella and falls into a deep sleep, Frieda creates a portal by accident. Ella knocks Frieda back and punches her into the portal. In the final scene, Frieda is shown trapped in the Arctic surrounded by elephant seals. 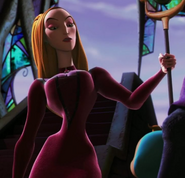 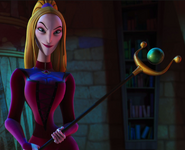 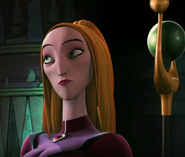 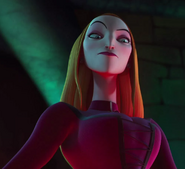 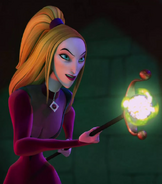 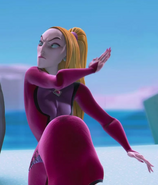 Frieda on the original German cover.

Frieda on the Italian dub cover.

Frieda on the Chinese dub cover.

Frieda on the Korean dub cover.

Add a photo to this gallery
Retrieved from "https://femalevillains.fandom.com/wiki/Frieda_(Happily_N%27Ever_After)?oldid=187969"
Community content is available under CC-BY-SA unless otherwise noted.