The Female Villains Wiki
Register
Don't have an account?
Sign In
Advertisement
in: 2010s, Assassin, Bare-Handed,
and 13 more

Francine Gruber (The Adventures of Superseven)

Francine Gruber (Michelle Jubilee Gonzalez) is an antagonist in the 2011 episode "Operation: Four Play Volume 2"(episode 4) for the action comedy web series "The Adventures of Superseven", which appeared on YouTube from 2011-2015.

In the episode, Superseven (Jerry Kokich) and his once partner and ex-lover Sandra West (Olivia Dunkley) are discussing why it is that Superseven hangs out in a parking garage.  Just then, they are surprised by the entrance of Franz Gruber (Kurt Carley) and his wife, Francine Gruber.  Franz is also wearing a mask to conceal his identity.  However, Superseven calls them out and identifies his two would be muggers by name.  Franz and Francine are husband and wife assassins, who work for T.H.E.Y., the criminal arch nemisis of Superseven's T.H.E.Y. organization.

Franz takes off his mask and he and Francine let Superseven and Sandra that they have a contract to kill them.  Sandra is most upset to hear that Superseven's head is worth $100,000, and she is only worth $75,000.  Francine tells her that she can take it up with their boss, Mr. O.

Francine and Franz have their pistols burned out of their hands.  As a result, the pair takes turn at hand to hand combat.  When it is time for Francine and Sandra to fight, the two exchange a very good bout.  Sandra is finally able to choke Francine out.  However, Franz is able to locate his gun and attempts to shoot Sandra.  Sandra jumps out of the way at the last moment, and Francine takes the bullet in the stomach.  Francine and Franz bicker back and forth over their misfortune, and as Francine is dying, she shoots her husband dead. 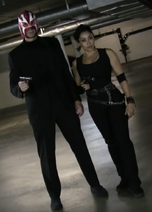 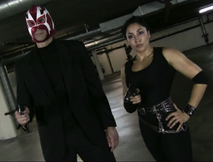 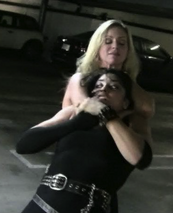 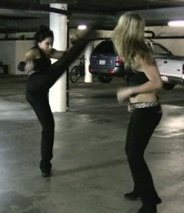 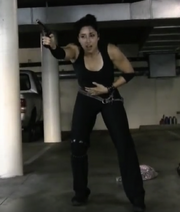