Frances McMahon, aka Wanda Rae Scutnik (Lee Purcell) is the main villainess from "Portrait of Death," episode 10.13 of Murder, She Wrote (airdate January 16, 1994).

Not much is revealed about Wanda Rae Scutnik's past, only that she was an inmate at the Missouri Women's Prison, where she was in the early stages of a 30 year sentence for murder. While in prison, Wanda was the inspiration of a portrait painted by her prison roommate, Elizabeth McKay, which was simply titled, "The Roommate." Wanda escaped from prison a year before the episode's events, and took a position as the assistant for sculptor Kim Mitchell, going by the name Frances McMahon.

While at the art gallery, Frances was alarmed to discover "The Roommate" hanging up, which showed what she looked like before she dyed her hair and wore contacts. Fearing that she would be found out, Frances stole the painting, but she still sensed that curator Philip Jovet would connect her to the painting and figure out her true identity. Late one night, Frances snuck into Jovet's apartment and killed him, using one of Kim's metal sculptures to stab him to death.

Jessica Fletcher revealed Frances' true identity when she confronted her at her apartment, and it was at that moment that Frances attempted to kill Jessica, only for police to enter and arrest her. Frances confessed to the murder right before she was sent back to prison. 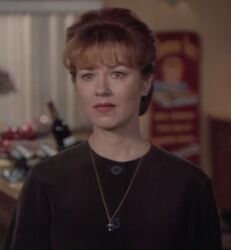 Frances' reveal as Wanda Rae Scutnik
Add a photo to this gallery
Retrieved from "https://femalevillains.fandom.com/wiki/Frances_McMahon_(Murder,_She_Wrote)?oldid=144882"
Community content is available under CC-BY-SA unless otherwise noted.