Start a Wiki
watch 01:48
The Loop (TV)
Do you like this video?
Frances Compton (Saskia Reeves) is the villainess of "Beyond the Shining Sea: Part 2", episode 8.06 of BBC's Death in Paradise (airdate February 14, 2019). She was the on-site psychiatrist and motivator for the investment company owned by Ewan Boyd, later becoming the company's vice president.

The preceding episode, "Beyond the Shining Sea: Part 1", had Harrison Green being arrested for the murder of his girlfriend, Tiana Palmer. Patrice Miller (Harrison's best friend and the fiancee of DS Florence Cassell) refused to believe Harrison was guilty, with Florence overhearing him call someone and arrange a meeting to talk about Harrison's case. Florence followed Patrice to the location, where she was non-fatally shot by an unseen figure.

After DI Jack Mooney arrived with the rest of the police team and paramedics, Patrice was found in another room of the building shot dead, with the last number he called on his phone being traced back to a villa on Rosalie Island where Ewan was staying with Frances and company lawyer Martin Stow. When asked about Harrison and Tiana, the trio claimed that they had not known Tiana and only had a passing relation to Harrison, as they had used his water taxi service to go to the mainland. Frances was revealed to have lied about not knowing Tiana, however, when a search of the latter's laptop revealed an email from Frances asking her to give Ewan "breathing space". When questioned, Frances claimed that Ewan had taken a romantic interest in Tiana when she visited Rosalie Island, and that she had dissuaded her fromm pursuing him due to knowing about Ewan's penchant for avoiding long-term relationships.

The Saint Marie team's investigation revealed that the group had lied about not having a gun on their property and that Martin had ties with illegal arms dealer Darrius Brookes, and it was while Jack was in the midst of having Martin arrested that Ewan and Frances came out and Frances asked to speak to Jack in private. Once he was alone with Frances and Jack, Ewan confessed to be dying of a brain tumor, having come to Rosalie Island to live out the remainder of his life and use the gun to end his life on his own terms. As for lying about having the gun, Ewan revealed that he had assumed the police weren't able to find it because he hid it, only to later discover it was missing. This led Ewan to believe that an outsider stole the gun from the villa to use in Patrice's murder, assuring Jack that no one in the villa could be the culprit.

While the investigation initially appeared to hit a dead end, Jack eventually came to uncover the true connection between Tiana and Ewan: Ewan was Tiana's biological father. This also led Jack to realize that not only was Frances responsible for killing Patrice and shooting Florence, she had also orchestrated Tiana's murder.

As Jack revealed after gathering Frances and her colleagues at their villa, Frances had been promised half of Ewan's estate and a controlling share of the business in the event of his impending death, and after learning about Tiana, Frances feared that Ewan would instead leave everything to his daughter. With that, the evil Frances used her skills as a psychiatrist/motivator to gaslight Harrison into killing Tiana, using the fact that Tiana was aware of how his gambling addiction had hurt his family business and driven him to steal from her to cover his losses.

As for Patrice, he was revealed to have been calling the villa to ask Martin for help with Harrison's case, only for Frances to answer instead and arrange a meeting, planning to kill Patrice to prevent him from uncovering her role in Tiana's murder. During the meeting, Frances struck Patrice with Ewan's gun to knock him unconscious when he became distracted by hearing Florence call out for him, later shooting Florence in an attempt to tie up loose ends and killing Patrice once he woke up. As for how she managed to get back to Rosalie Island after committing the murders, Frances (still wearing her hooded disguise) hid aboard the boat Jack and his associates took to the island, hiding under a tarpaulin and taking a shortcut to make it back to the house before anyone saw she was missing.

Jack confronted Frances about her actions with his team, with Ruby Patterson revealing how Frances' DNA was found on the tarpaulin she hid under to return to the villa after killing Patrice. After initially denying Jack's claims, Frances eventually confessed, revealing that Tiana's wanting to do a DNA test to prove Ewan was her father was what motivated her to set Tiana up to be killed. With that, Frances was placed under arrest, with Florence being allowed to handcuff her fiancee's killer. 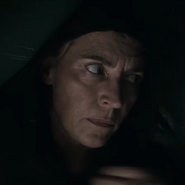 Frances (in her hooded disguise) hiding under the tarpauline 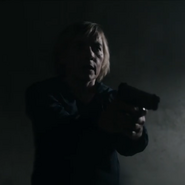 Frances after shooting and killing Patrice 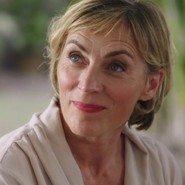 Frances' smirk during her villainous reveal
Add a photo to this gallery
Retrieved from "https://femalevillains.fandom.com/wiki/Frances_Compton_(Death_in_Paradise)?oldid=162017"
Community content is available under CC-BY-SA unless otherwise noted.