Start a Wiki
watch 01:51
The Loop (TV)
Do you like this video?
Fräulein Hibbler (Lynette Mettey) is a villainess from "Klink From the Defense," episode 6.19 of Hogan's Heroes (airdate February 7, 1971).

Hibbler was a secretary for Luftwaffe Colonel Hugo Hauptmann, who is regarded as a national hero in the episode. In actuality, Hauptmann was defecting to the Allies, as he had planned to hand over a map of the German submarine bases to the Allies, but only if he was safely sent to London. In another twist, Hibbler was actually a villainous Gestapo agent, and she planted a bug in Hauptmann's office, which recorded his conversations. Her recordings led to Hauptmann being arrested by the Gestapo following his meeting with Col. Hogan in the beginning of the episode.

The Heroes needed Hauptmann to be acquitted, which was tough due to not only Col. Klink representing him, but also General Burkhalter serving as the prosecution. Knowing Klink's fear of his superior, Hogan convinces Klink that Hibbler is actually a British agent named Sally Holmes, and that she set up Hauptmann as a defector. The ruse had the Heroes taking the recordings, after which Newkirk added a message to "Sally" before LeBeau placed them back in Klink's safe. Later on, the evil Hibbler testified abour Hauptmann's guilt, stating that the recordings proved he was a traitor against the Nazis.

However, while playing the recordings, Newkirk's message played following Hauptmann's conversation, leading Klink, Burkhalter, and the rest of the court to become convinced that Hibbler was a phony. The Nazi villainess protested the recordings and stated that they were fake, but despite this, Hibbler was arrested and taken into custody. 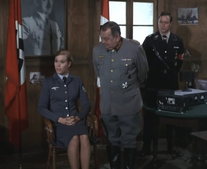 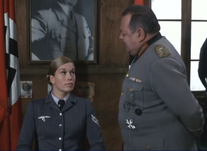 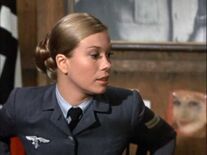 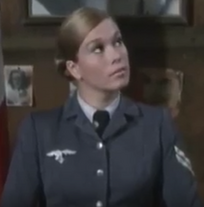 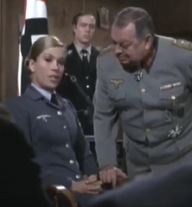 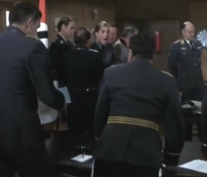 Retrieved from "https://femalevillains.fandom.com/wiki/Fr%C3%A4ulein_Hibbler_(Hogan%27s_Heroes)?oldid=143009"
Community content is available under CC-BY-SA unless otherwise noted.