Female Raiders (Salli Saffioti) are an enemy type that appears in the 2015 video game Fallout 4.

In the game's setting, raiders are a group of hostile gangs that operate throughout the Commonwealth and Boston. Many raider gangs have female members with some having female leaders. Female raiders are cruel sadistic and psychopathic enemies that appear openly attack anyone who crosses their path. Some raiders are known for kidnapping settlers and holding them for ransom while others are known for taking settlers' caps through raider tolls in various areas in the Commonwealth. Like the female raiders from Fallout 3, these raiders enjoy murdering and plundering settlers and are known to be mostly irredeemable barbarians. Some raiders however, do posses sympathetic and remorseful traits as one can be found mourning a fallen raider in a cemetery. Also these types of female raiders have more lines of dialogue compared to the female raiders found in Fallout 3.

While many are unnamed enemy NPCs, some in fact have actual names. This pertains mostly to raider leaders.

Most female raiders carry a variety of different weapons. While some will carry firearms, others will carry and use physical weapons such as knifes, baseball bats, pool sticks, etc.

Like most enemies in the game, female raiders can be killed by the player in a number of different ways. If the player has an intimidation perk, they can pacify a raider and turn them against other raiders. 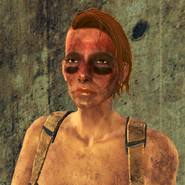 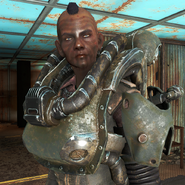 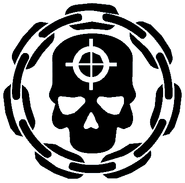 Raider logo
Add a photo to this gallery

Retrieved from "https://femalevillains.fandom.com/wiki/Female_Raiders_(Fallout_4)?oldid=206303"
Community content is available under CC-BY-SA unless otherwise noted.