Start a Wiki
watch 01:50
The Loop (TV)
Do you like this video?
Listed below are the female enemies found in the 1992 Arcade beat'em up game "B. Rap Boys" (Ｂラップボーイズ) by developer Kaneko.

The Lion Tamer is a boss in the game. She first appears alongside two lions to battle the player. Later in the game, she appears a second time along with the other bosses. She utilizes kicks, her whip and pyrotechnics to attack the hero. 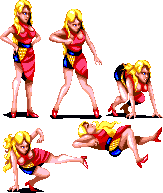 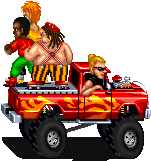 At the beginning of a game, a truck bursts through a wall. There are glimpses of what appears to be a blonde, sunglasses-wearing woman riding in the passenger seat whenever the front of the truck comes into view. She is not able to be defeated or attacked, but simply drives off after a certain amount of time.

Tucked away in the game's code are the tiles for an unused bikini-wearing female enemy. A somewhat similar bikini woman riding in the truck from the beginning is also shown in a screenshot taken from a promotional flyer for the game. 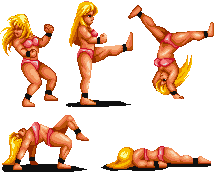 Retrieved from "https://femalevillains.fandom.com/wiki/Female_Enemies_(B.Rap_Boys)?oldid=134870"
Community content is available under CC-BY-SA unless otherwise noted.