The Female Villains Wiki
Register
Don't have an account?
Sign In
Advertisement
in: 2000s, Assassin, Attempted Murder,
and 21 more

Female Agent (Around the World in 80 Days)

Female Agent (Maggie Q) was a minor antagonist from Disney's 2004 film, Around the World in 80 Days. She was an assassin that worked for General Fang and was affiliated with the Black Scorpions. She is introduced halfway through the film when the protagonists Liu Xang, Phileas Fogg, and Monique Laroche arrive in India to escape from British authorities. She ambushes both Phileas and Monique while Xang is occupied with fighting a hulking chained agent. When Monique attempts to defend herself against the agent, the latter violently grabs Monique by her throat and hangs her against a wall. In an effort to stop her attacks, Phileas attempts to convince the agent into believing his sextant is actually a deadly knife. When the agent reveals to him that she's aware of what a sextant is, Phileas unleashes the device against a large rug held together by wooden beams, that fall and directly hit the agent in the face, knocking her to the ground unconscious. Phileas and Monique notices her regaining consciousness and decide to run to avoid confronting her again.

The female agent wore a green shirt along with a black skirt. When she first appears on screen, she is disguised while wearing a red colored niqab that covered her face and entire body while spying on both Phileas and Monique. On her stomach was a black scorpion tattoo. Her main weapon was a large sword.

Female Agent in her disguise. 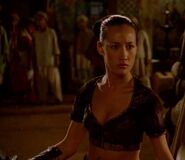 Female Agent carefully watching Phileas flip around with his sextant. 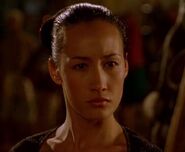 Female Agent moments before being struck in the face by a wooden beam.

Female Agent getting knocked out.