At the beginning of the story, Fanny is enrolled in a small summer school in Cornwall, England. She soon meets the school gardener, Ted, and develops lustful feelings for him. Shortly after, Janira , the school's sole teacher, confronts Fanny and tells her that she is not allowed to associate further with him. Upon being informed of this, Ted suggests that they start to meet secretly in an unknown section of the school that he accidentally stumbled upon one day, which can be only accessed via a hidden passage.

Several floors below the school, Fanny finds the decor of the secret area to be that of a torture dungeon. An ancient book is also found there and thanks Fanny's knowledge of Latin, she translates the contents to reveal stories about a witch from centuries ago, who also happened to be named "Janira".

Little do the two know that all of these events and discoveries were premeditated by the teacher, who has been keeping a close eye, as well as ear, out the entire time. In addition, Janira has been concocting potions to help ease the inhibitions of the two youths. Eventually, after becoming more and more fascinated by the murderous tales of the witch, Fanny and Ted decide to sacrifice another one of the girls at the school in a similar manner. That night, however, Fanny is greeted by a spirit who claims to be the true Janira and who leaves her with some cautionary words about what is really going on.

Fanny lures her classmate Liz down into the dungeon, where she is raped, tortured and finally murdered. Delighted, the teacher walks in on them and congratulates them for being marvelous servants in her grand scheme; promising not to alert the authorities if they help sacrifice the remaining females at the school for her. The two agree without much hesitation and stealthily abduct each of the schoolgirls once night falls.

Once Janira has evoked the required demonic spirits, Fanny beings torturing one of the girls by slicing off one of her breasts. However, she then immediately tosses the severed body part at her teacher, splashing her with the fresh blood. Horrified, Janira curses Fanny and dies in a fiery blaze. When asked by Ted why she did such a thing, Fanny explains that she is the descendant of the true Janira and that the which's spirit told her that the power the other Janira sought could be hers, but only by doing the one thing which could ruin the ritual - allowing blood to come into contact with the teacher.

Lastly, Fanny tells Ted that the same rules that applied to her teacher now apply to her as well, and that the seven girls must all be sacrificed before she can touch blood and gain her evil powers. The gardener is more than happy to indulge the request of his new servant and lover.

Fanny's father brings her to meet with the teacher.

Getting to know Ted.

...as well as the book about Janira.

Putting Liz through hell for their own entertainment.

"Caught" by their teacher. 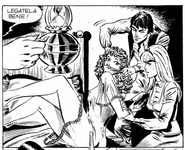 Fanny reveals all about her ancestor, the witch.

And the cycle goes on.
Add a photo to this gallery

Retrieved from "https://femalevillains.fandom.com/wiki/Fanny_Ambler_(Oltretomba)?oldid=207830"
Community content is available under CC-BY-SA unless otherwise noted.