FanGirl (Kari Wahlgren) is a villain in the 2013 episode "Solo Spies" for the TV series Totally Spies.

FanGirl appeares in "Solo Spies". Taking her fanaticism to extremes, she captures the spies. She is similar to Hayes in her obssession. In addition to Samantha, Alexandra, and Clover; FanGirl also captured Reynaldo, a WOOHP agent; Kip, a spy from the Secret Intelligence Service; and a Canadian agent named Hilary.

When questioned by Clover as to why she decided to collect her and her friends, she revealed that she had run out of things to collect and the only thing left for her to add to her collection were "living, breathing spies".

FanGirl uses her doll named "Voltaire" attack the girls.  When the girls think that Voltaira can't hurt them, FanGirl transforms the small doll into a giant robot.  She says that Voltaira was "the most indestructable spy bot from a TV show to ever fight crime."  The robot begins to knock all the girls out.  However, the girls get the upper hand by wrapping Voltaira up in cables.  They then plug the cables into the electricity and the volts shock Voltaira.  Voltaira turns her x-ray eyes onto FanGirl and wipes out her prized collectionl.  Voltaira then drops to the ground defeated by the electric current.  FanGirl is attacked by the girls' pet pig, who jumps on the top of her head.  She is then captured when the Doll Box is placed over the top of her.

FanGirl is taken away by agents while she is still sealed inside the doll box.  She was arrested at the end of the episode and Jerry Lewis said that her extensive spy collection would be auctioned off for charity and her underground website would be shut down permanently. 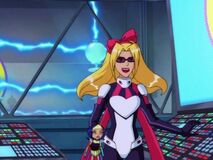 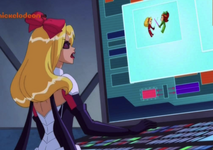 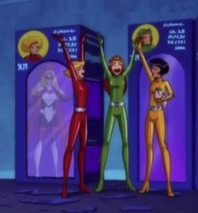 Add a photo to this gallery
Retrieved from "https://femalevillains.fandom.com/wiki/FanGirl_(Totally_Spies)?oldid=202911"
Community content is available under CC-BY-SA unless otherwise noted.