An unnamed woman proclaiming herself to be the future Holy Mother of Darkness is the antagonist of the manga story "Ikei Seibo" (異形聖母) by Hashiba Sunanin (羽柴砂忍).

The story begins with brunette villainess having captured a blonde nun; demanding that she divulge a particular name from the Bible. The name she speaks of is that of the woman arrayed in purple and scarlet colour, and decked with gold and precious stones and pearls, having a golden cup in her hand full of abominations and filthiness of her fornication, and sitting upon a scarlet colored beast from the Book of Revelation.

Despite being cruelly tortured, the nun stubbornly refuses to cooperate. Even so, however, the brunette is not deterred. She reveals that she has also captured a female acquaintance of the nun and threatens to butcher her if this obstinance continues.

"Those of your ilk suffer more when you see others suffering than to be the ones suffering, do you not?" she gloats.

Finally, the nun gives in and shouts the name "Babylon". Exultant in her victory, the villainess murders the hostage anyways, stating that is a crucial piece of the ritual that will allow her to become the "Holy Mother of Darkness". She summons forth the scarlet beast with seven heads and ten horns and offers the virgin nun to it as a sacrifice. However, the beast immediately begins to viciously devour the brunette instead. At this point the nun transforms into an angel and explains to the dying woman:

"Your mistake was thinking that all members of the clerical families are saintly worshippers of God… 16 years ago, my mother became pregnant in a ritual and died after giving birth to me… I am the Beast of Revelation! I have inherited the power, status and grand authority of my father, the Dragon! But don't worry... You will not be the only one who dies… Very soon, the whole world will follow after you!"

The beast summoned, the woman smugly thinks she has won... 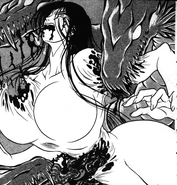 ...but in the end...
Add a photo to this gallery
Retrieved from "https://femalevillains.fandom.com/wiki/False_Holy_Mother_of_Darkness_(Ikei_Seibo)?oldid=194400"
Community content is available under CC-BY-SA unless otherwise noted.