The unnamed Fake Nun (Nancy Lenehan) is a villainess from "Cheaters", episode 5.22 of The Golden Girls (airdate March 24, 1990). She was introduced as a nun who encountered Blanche Devereaux and Sophia Petrillo at the mall, who had just discovered a lost wallet along with an unnamed man, with the wallet containing over $2,000.

After deciding against turning the wallet over to the lost-and-found, the trio agreed to put a notice about the wallet in the newspaper and split the money if no one came forward to claim it. Needing a solution to how to keep the wallet stored during that time, the group asked advice from a passing nun, who suggested the three all contribute some money to get a joint bank account to store the wallet money, with Blanche and Sophia each contributing $1,000.

However, after agreeing to the deal and going to the bank so Sophia could withdraw her payment, the "nun" was shown smoking a cigarette, serving as a hint to her true persona as a deceitful con artist. As revealed later on, the brunette woman was not really a nun, but instead an accomplice of the man in a plot to deceive Blanche and Sophia out of $2,000. While Blanche and Sophia were initially hesistant to tell anyone about the scheme they fell for, Sophia later told everything to Rose Nylund, revealing how the male con artist had swapped the envelope with all the money in it with one filled with shredded paper; something they failed to notice until they arrived at the bank to make the joint account.

Rose (being an employee for a consumer protection show) informed her roommates that they had fallen for a confidence game scam known as a "pigeon drop", while also deducing the fake nun as an accomplice in the scheme. Rose eventually convinced Blanche and Sophia to report what happened to them to the police, with Blanche learning from a detective the next day that they had located and arrested the con artists. 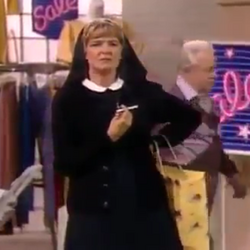 The fake nun's villainous reveal
Add a photo to this gallery
Retrieved from "https://femalevillains.fandom.com/wiki/Fake_Nun_(The_Golden_Girls)?oldid=161087"
Community content is available under CC-BY-SA unless otherwise noted.