Faith Stewart (played by Barbara Carrera) is the villainess in the 1987 comedy film Love at Stake.

Miles Campbell, a recent graduate of Harvard Divinity School, arrives in the Puritan village of Salem, Massachusetts to be come the local parson's assistant. He meets with his old childhood sweetheart, baker Sara Lee, and plans to marry her.

Meanwhile, greedy Judge Samuel John arrives to meet with the Mayor Upton to discuss plans for building a Heritage Mall in Salem. To acquire the necessary land they hatch a scheme to accuse certain villagers of witchcraft and then take their property. When the accused are tried, convicted and burned, their land will be confiscated. The plan is working. However, the saucy Faith Stewart, who is secretly a witch, arrives from London for Thanksgiving to say with her cousins. She sits by and allows the trials to continue, soaking it all in. In addition, she makes Parson Babcock go blind.

Later, Faith accuses Sara of witchcraft in order to win him over for herself. She convinces the townspeople of this by making her fly on the end of a broomstick.

Abigail's husband Nathaniel makes a pass at Faith. As a result she makes him believe that their turkey is a topless woman. Later, when he is about to confess to his wife that he is in love with the turkey, Abigail reveals that she chopped the bird's head off and that is their Thanksgiving meal. Nathaniel goes insane and dies of a broken heart.

Miles must prove Sara's innocence before she is burned at the stake. At the trial, Dr. Joyce Brothers takes the stand and tries to explain Sara's psychological theories to the dimwitted people of the town. When the local choir teacher brings up her pupils as character witnesses, Faith makes them break out into a suggestive rap full of girating hips. The jury finds Sara guilty and she is taken outside and tied to a stake along with Miles.

As the fire is about to be thrown down, Miles kicks it from the Judge and it lands at the feet of Faith. As a result, a small explosion takes place and Faith has turned into an ugly old hag (Anne Ramsey), who exposes the Judge and the Mayor in their plot. She then disappears, saying that she has grown tired of Salem. 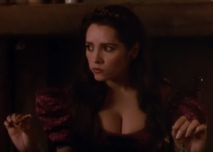 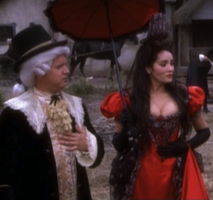 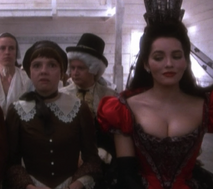 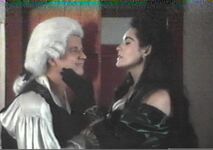 Add a photo to this gallery
Retrieved from "https://femalevillains.fandom.com/wiki/Faith_Stewart_(Love_at_Stake)?oldid=197485"
Community content is available under CC-BY-SA unless otherwise noted.