With Fai-fai working as a hotel clerk, the villain known as

The Doctor and his team take over the building, take the guests hostage, and initiate a massacre. Frankie Lone, a parody of Jackie Chan, manages to escape and runs into Fai, who pretends to be a helpless damsel in distress, leading him right to her partner, Bond. It is revealed that Bond is obsessed with beating Frankie in combat. Frankie runs away after encountering Bond.

The Doctor warns the police that if they do not meet his impossible demands, he will toss a hostage out the window every ten minutes, with Frankie's manager Charlie Tso as the first victim. The Lones meet Fai and Bond in the midst of an argument that has escalated into a fight. The Lones intervene, unaware of Fai's true colors, until she holds them at gunpoint. Bond pressures Frankie into fighting him. After Frankie kills Bond, Fai is about to murder the rest of them, but Chow shoots her dead.

"You have to protect me" Innocent facial expression 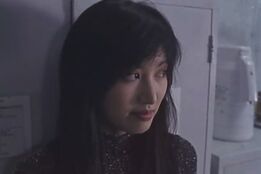 Her partner Bond 'kidknaps' her to lure Frankie out

Finally, the Jackie Chan parody figures out she's a villainess

Retrieved from "https://femalevillains.fandom.com/wiki/Fai-fai_(High_Risk)?oldid=203192"
Community content is available under CC-BY-SA unless otherwise noted.