Start a Wiki
watch 01:51
The Loop (TV)
Do you like this video?
Evil Kimberly (Amy Jo Johnson) is a villainess from "A Bad Reflection on You," episode 1.38 of Mighty Morphin Power Rangers (airdate November 22, 1993). She was one of five evil Power Ranger clones created by Rita Repulsa to destroy the Rangers' reputations. In the case of the Kimberly clone, she and the clones of Zack, Billy, and Trini were Putties, while the Jason clone was Rita's latest monster, known as Twin Man.

The evil quintet's plan began at Angel Grove High, as they sabotaged the school's drinking fountain by filling it with laundry detergent. All the while, Evil Kimberly displayed her charms on Skull, accepting a date with him, much to his and Bulk's surprise. Principal Caplan ended up being the recipient of the prank, and sent the quintet into detention. The clones left, and the real Rangers ended up serving the punishment.

With the Rangers detained, the evil clones morphed and attacked Angel Grove. The Rangers easily distract Bulk and Skull, and later morph and teleport to face their evil dopplegangers. During a battle between the Pink Rangers, the evil Kimberly clone tricked Trini into believing that she was the real Kimberly being attacked by her clone. Trini inadvertently took down the real Kimberly, leading to the impostor villainess attacking Trini and mocking her. Shortly afterwards, Evil Kimberly was defeated by the real Pink Ranger with her Power Bow, which turned the clone back into a Putty. 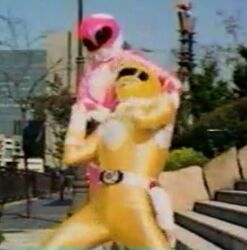 Evil Pink Ranger attacking the real Yellow Ranger
Add a photo to this gallery
Retrieved from "https://femalevillains.fandom.com/wiki/Evil_Kimberly_(Mighty_Morphin_Power_Rangers)?oldid=122267"
Community content is available under CC-BY-SA unless otherwise noted.