The Evil Beach Bunnies are a group of six henchwomen from the Totally Spies episode I, Dude.

They work for the episode's main villain Frankie Dude, a former surfer who is destroying beach resorts to restore them back to their previous states, which were more suitable for surfing.

They are first seen capturing the show's spy heroines and bringing them to Frankie Dude's submarine. They then place them in the Tanning Bed of Doom and crank the heat up to maximum, attempting to burn the spies to death. The spies use their gadgets to escape the tanning bed and have a very short fight with the Beach Bunnies. Their fighting skills are not as good as the spies, however, and they find themselves punched, kicked and thrown around. They are ultimately defeated when one of the spies sprays a sticky substance called "24 Hour Extra Power All Day Adhesive Hair Pomade" on the feet of the bunnies, causing them to be stuck in place and unable to move. They struggle in vain, but the substance is too strong and sticky for them to escape from. 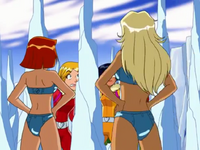 All six beach bunnies show up and capture the spies 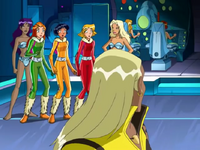 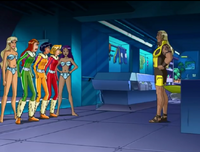 Beach bunnies watch over the spies as Frankie Dude speaks 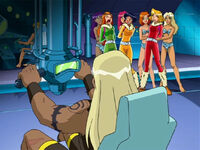 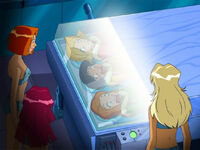 Watching the spies in the Tanning Bed Of Doom 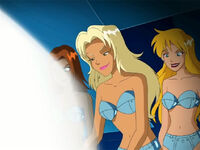 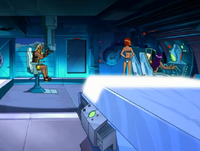 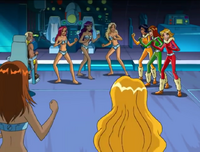 A blonde bunny tries to punch our hero... 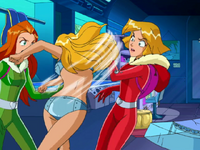 ...but is dealt with by Clover 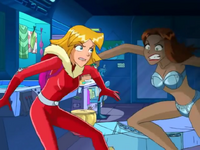 A brunette bunny tries to ambush Clover from behind... 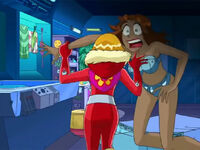 ...but is grabbed and thrown by the heroine 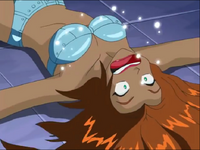 The brown haired bunny is thrown to the ground in shock

The purple haired bunny tries to recapture Sam from behind 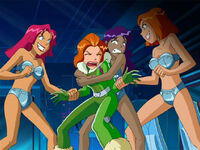 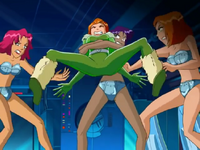 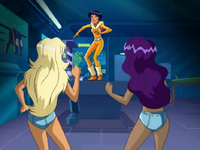 A beach bunny's foot before and after getting sprayed with glue 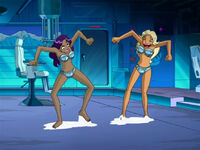 A glue like substance is sprayed on the feet of the evil bunnies, rendering them useless 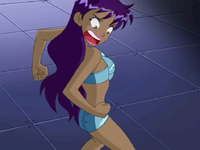 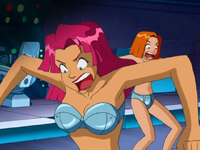 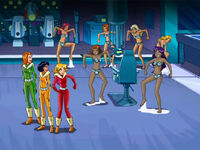 The evil bunnies are all stuck and defeated
Add a photo to this gallery
Retrieved from "https://femalevillains.fandom.com/wiki/Evil_Beach_Bunnies_(Totally_Spies)?oldid=200197"
Community content is available under CC-BY-SA unless otherwise noted.