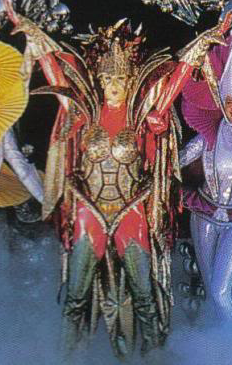 The Evil Alien is the primary antagonist of the short lived stage show "Splashtacular" at EPCOT Center. The show was televised on The Disney Channel in 1994.

The villainess crashes a celebration held by Mickey Mouse and his friends with the goal of robbing the planet earth of all its colors, as her own planet lost its' color during an intergalactic war. The alien also terrorized Mickey and his friends during her villainous rantings, particularly frightening Minnie Mouse by snatching her flower from her. 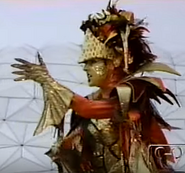 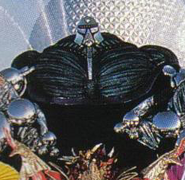 The evil alien first makes her appearance in this large suit.

TerrorsauX (night)
Add a photo to this gallery

Retrieved from "https://femalevillains.fandom.com/wiki/Evil_Alien_(Splashtacular)?oldid=182441"
Community content is available under CC-BY-SA unless otherwise noted.