Start a Wiki
watch 01:24
The Loop (TV)
Do you like this video?
Evil-Lyn (Meg Foster) is a villainess in the 1987 live-action film Masters of the Universe. She is losely based on the Evil-Lyn character from the 1980s He-Man cartoon.

Evil-Lyn is a henchwoman to Skeletor (Frank Langella) and spends most of the film trying to retrieve a "cosmic key" which has ended up on Earth in the hands of a teenager, Kevin Corrigan (Robert Duncan McNeill), who thinks it's a synthesizer. Later a cop, Lubic (James Tokan), takes the key from Kevin believing it to be stolen. Then Evil-Lyn shows up and has an interrogation collar put on Kevin, which forces him to tell the truth, revealing that Lubic has the key. Evil-Lyn successfully recovers the key, summons Skeletor and they take He-Man (Dolph Lundgren) back to Eternia as a prisoner. Evil-Lyn deserts Skeletor after he absorbs the "Power of the Universe" without sharing it with her.

Evil-Lyn is wearing knee-length leather boots, lavender catsuit, shiny metal breastplate and vambraces, and elaborate jewelled crown. Meg Foster's scary blue eyes add to the characters menace quite well. She is depicted as a powerful magic-wielder, but she rarely uses magic in the film except when she casts illusions.

Meg Foster also played villainess Hera in the series Hercules The Legendary Journes and Holly Thompson  in the 1988 movie They Live. 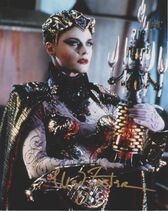 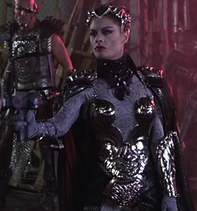 Add a photo to this gallery
Retrieved from "https://femalevillains.fandom.com/wiki/Evil-Lyn_(Masters_of_the_Universe)?oldid=155314"
Community content is available under CC-BY-SA unless otherwise noted.