Evelyn Deavor (Catherine Keener), also known as the Screenslaver, is the hidden main villainess of 2018's Incredibles 2. She is the sister of Winston Deavor, the CEO of DevTech, with Evelyn herself having served as the company's secondary CEO prior to the exposure of her true colors to the world.

The Deavor siblings' backstory revealed that their father worked regularly with superheroes, even setting up a private line which had been used to call two of them—Fironic and Gazerbeam. Late one night, the Deavor residence was broken into by burglars, but when Mr. Deavor picked up the phone to attempt to call supers, it was disconnected, as this was during the long period where supers were deemed illegal. Seconds after hanging up, Mr. Deavor was shot to death by one of the burglars. His wife (Winston and Evelyn's mother) passed away months later, having been heartbroken over the loss of her husband.

Winston, a superhero superfan, long believed that the loss of his parents could have been prevented if supers were legalized. Evelyn, however, was much more cynical, as she blamed her father for not taking himself and his wife to the home's safe room. She mostly blamed supers for the deaths of her parents as she saw people as putting their faith in them too much rather than thinking for themselves, making them weak, and while Winston was planning to organize a publicity stunt in his plan to change people's opinions on supers and legalize them again, Evelyn had turned heel and was secretly working as a villainess in her quest to make supers permanently illegal.

The film's events saw Bob (Mr. Incredible) and Helen Parr (Elastigirl), along with Lucius Best (Frozone) invited by Winston to DevTech in New Urbem, who gave the details of his publicity plan to them, which was revealed to be centered on Elastigirl. Throughout the film, Elastigirl found herself dealing with a mysterious supervillain who called themselves the Screenslaver, who used hypnosis through TV screens and other monitors to cause chaos in an attempt to discredit superheroes. All the while, Evelyn and Helen formed a bond due to the former bringing up her tech skills and Winston's knack for salesmanship, with Helen telling Evelyn to go after what she wants in life. As for the Screenslaver, Elastigirl managed to save an ambassador from his murderous clutches, and was later able to track his signal with Evelyn's help, finding him in an apartment complex. After a chase, Elastigirl subdued the Screenslaver and unmasked him, revealing him as an unnamed pizza delivery man who had no memory of what had happened.

After the Screenslaver's capture, Evelyn spotted Elastigirl looking over the scene, as she noticed something was amiss due to how easy it was. Evelyn told Elastigirl to solely focus on the fact that she captured the bad guy, only for the latter to realize that the Screenslaver was under control himself, and she took out a set of hypnotic goggles from under the mask. It was at that moment that Evelyn's villainous reveal occurred, as she suddenly forced the goggles onto Elastigirl's eyes, revealing herself as the true mastermind behind the Screenslaver and his villainous deeds.

Later on, Elastigirl woke up tied to a chair and was encountered by the vengeful Evelyn, who voiced her bitterness towards supers. She stated that her father's dependence on superheroes made him weak (and that the others were weak as well for believing in supers) and led to his and her mother's deaths, while also blasting Winston and referring to him as a child for his belief in superheroes. The villainess revealed her true plan: to have superheroes declared illegal for good, and it included placing all of the supers under hypnotic control. Evelyn lured Mr. Incredible to the Deavor home under the pretense that his wife had been compromised, resulting in Mr. Incredible fighting against his hypnotized wife, with the fight ending with Elastigirl placing the goggles on her husband.

Evelyn also sent other supers to the home in an attempt to capture Violet, Dash, and baby Jack-Jack (whose many powers were just coming to the light), only for Frozone to appear and fight the hypnotized supers. Frozone ended up with the goggles on as well, leading to the kids escaping and heading to Winston's hydrofoil, the Everjust, where Evelyn would unleash the centerpiece of her villainous plot. After all of the ambassadors signed the International Supers Accord, a document which legalized supers once again, Evelyn instructed Mr. Incredible, Elastigirl, and Frozone to wreak havoc after she hypnotized everyone except the trio and all of the other supers whom she was controlling, only for the three to be freed from the villainess' control by the combined effort of the Parr kids and Elastigirl (once Jack-Jack freed his mother).

Meanwhile, Winston confronted Evelyn regarding her actions aboard a private jet that she was using to escape the Everjust, only for the villainess to claim that what she was doing was for her brother's own good; his reply was to jump off the plane and back onto the hijacked hydrofoil. After the other supers' goggles were removed and destroyed, Elastigirl faced Evelyn once again aboard the jet, but became loopy due to the lack of oxygen that was intentionally caused by the latter. Despite that, Elastigirl fired a flare gun at Evelyn and sent her flying out of the plane by causing a decompression, only to later save her—despite the villainess' refusal. After the rest of the family saves the boat from crashing into Municiberg (which was Evelyn's intended plan), Evelyn ended up handcuffed and arrested, while ungratefully and callously defending her stance against supers despite having just being saved by one of them. 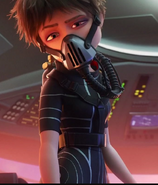 Add a photo to this gallery
Retrieved from "https://femalevillains.fandom.com/wiki/Evelyn_Deavor_(Incredibles_2)?oldid=184868"
Community content is available under CC-BY-SA unless otherwise noted.