Eve Harrington (Anne Baxter) is the villainess in the 1950 film "All About Eve".

Eve Harrington is a scheming, ruthless young actress who systematically steals the career of her idol, Margo Channing (Bette Davis).

Eve was born Gertrude Slojinksi in a small town in Kansas.  She is paid to leave her hometown after she is caught having an affair with her married boss.  She recreates herself as Eve Harrington and moves to New York, intent on becoming a Broadway star.  She goes to the theater every night and camps outside the dressing room of her idol, legendary actress Margo Channing (Bette Davis).

One night, Margo's friend Karen Richards (Celeste Holm) takes pity on Eve and brings her in to meet her heroine.  Eve charms Margo with her devotion and a fabricated story about growing up poor and losing her husband in World War II.  Margo hires Eve as her assistant on her new production, Aged in Wood.

Eve slowly but surely insinuates herself into Margo's life and career, and eventually manages to become her understudy without her knowledge.  Margo becomes suspicious, but her friends, particularly Karen and her husband, playwright Lloyd Richards (Hugh Marlowe), are blinded by Eve's charms.

Karen decides to help Eve by making sure that Margo misses a performance, allowing Eve to go onstage in her place.  Eve's performance wows the audience, as well as influential critic Addison DeWitt (George Sanders), who decides to make Eve his new protege.  As DeWitt and other critics flock to Eve, they turn on Margo, dimissing her as a has-been.  Meanwhile, Eve tries to seduce Margo's boyfriend, Bill, but he rejects her.

Eve blackmails Karen into making Lloyd give her the lead in his new play, threatening to tell Margo that she is responsible for her missed performance unless she gives her what she wants.  Margo announces that she will not take the lead in the play, making way for Eve to be cast in the part.

Eve confides in DeWitt that she plans to marry Lloyd, who she believes will write award-winning plays showcasing her.  Angered by her defiance, DeWitt reveals that he knows about her true identity, and blackmails her.  In exchange for his silence, she will not marry Lloyd or anyone else, as she now "belongs" to him.

With DeWitt's help, Eve becomes a star, and plans to go to Hollywood.  At an awards show, she hypocritically thanks Margo, Karen, Bill and Lloyd for their help.  She skips the after-part and goes home, where she finds that a young fan named Phoebe has broken into her bedroom, hoping for an autograph.  Phoebe offers to help a jaded Eve pack her bags for Hollywood, and holds up Eve's award like a crown, implying that she will insinuate herself into Eve's life just as Eve did Margo's. 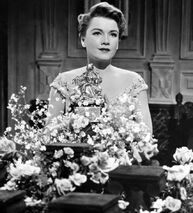 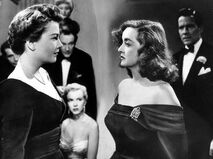 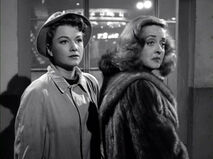 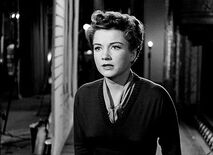 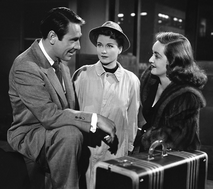 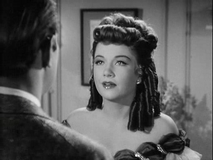 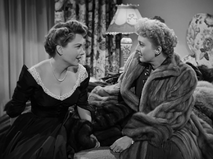 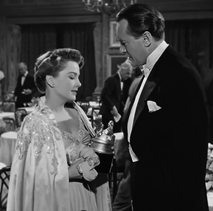 Add a photo to this gallery
Retrieved from "https://femalevillains.fandom.com/wiki/Eve_Harrington_(All_About_Eve)?oldid=193864"
Community content is available under CC-BY-SA unless otherwise noted.