The Female Villains Wiki
Register
Don't have an account?
Sign In
Advertisement
in: 2000s, Attempted Murder, Brunette,
and 24 more

Eve Goode (Angie Harmon) was the main villainess from 2006's Glass House: The Good Mother. She was a nurse who was diagnosed with Munchausen by Proxy, adopting children and slowly poisoning them. Once she nursed them back to health, Eve would poison them again just so they would need her. Her husband, Raymond Goode, was aware of her mental illness, but he would cover for her, which is what he did when Eve killed their son, David.

The Goodes take in Abby and Ethan, who lost their parents in an auto accident. Within days, Eve begins her twisted doting ways on Ethan while showing clear disdain for Abby, making sure her and Ethan's bedrooms were far apart. Additionally, Eve slapped Abby during a heated argument between them and set her up to cut herself while washing dishes, allowing her to inflict cruel pain to Abby while stitching her wounds before drugging her for three days. When Abby realizes what Eve is doing, Eve and (to a lesser extent) Raymond do what they can to keep her apart from Ethan, especially after he becomes ill. After Abby learns the truth about what's happening to Ethan, as well as the past children in Eve's care, the villainous Eve attacked Abby and locked her in the attic.

Abby eventually escapes and tells Ethan that they're getting out, but Eve hears her on the intercom and chases her with a kitchen hatchet, with clear intent on killing her. While looking for Abby, Eve subdues Ben (a police officer and family friend of Abby and Ethan) with a syringe before finally fighting Abby on top of a stairwell. Abby shoves Eve down the stairs, but Eve survives the fall and attempts to kill Abby just as she is about to rescue Ethan. However, before she could, Eve was shot dead by Raymond.

Eve caring for Abby after she cuts herself 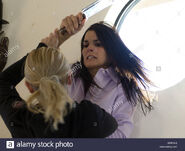 Eve after being shoved down the stairs by Abby
Community content is available under CC-BY-SA unless otherwise noted.
Advertisement