Start a Wiki
watch 01:51
The Loop (TV)
Do you like this video?
Eve Chambers aka Alice Wright aka Gemini (Rachel Nichols) is the hidden titular villainess of "All About Eve", episode 2.10 of NBC's Taken (airdate April 6, 2018).

Eve Chambers was worked at the Harvest Coalition, a company that oversaw the operations of the World Seed Vault. Eve hired the help of Christina Hart and her associates following the theft of a seed shipment, the thief having been hired by someone only known as "Gemini".

Upon meeting with Bryan Mills, Eve revealed to him that she was motivated in her work by her deceased sister Alice, who was an environmental activist. After failing to apprehend the thieves when they broke into Eve's apartment, Bryan and his team discovered that they were planning to sell the stolen seeds at an auction at Bellevue Gardens, leading him and Eve attending the auction to retrieve the seeds.

But as Bryan confronted the thieves at gunpoint at the Bellevue Gardens, Eve suddenly appeared and shot the two men before shooting Bryan as well, shooting one of the thieves in the head after blasting the two for double crossing her. Eve turned heel in the process, as she was revealed as the villainous Gemini, having enlisted the men to steal the seeds and hired Christina's team when her henchmen betrayed her and tried to take the seeds for themselves. The evil Eve then apologized to Bryan and expressed condolence for his sister's death (which he'd opened up to her about) before shooting him again, telling him she couldn't have him following her before making off with the seeds.

Bryan ultimately survived the shots due to the bulletproof suit he was wearing for the event, with Harden Kilroy uncovering Eve's true identity as Alice Wright, having been identical twin sisters with OB-GYN doctor Evelyn Wright, who died two years prior of an opioid overdose after being prescribed the drugs following an accident. The team ultimately discovered that the seed theft was a cover for Eve's true vengeful plot: releasing the fungal spore Pleospora papaveracea in the World Seed Vault to destroy the opium poppies (having pulled a similar stunt against Mexican cannibas crops). Bryan also discovered that the last phase of Eve's plan was to kill Maximillion Silver, the CEO of AG Pharmaceuticals, as his company produced the opium that her sister overdosed on and had just approved a new brand of opium they were falsely advertising as non-addictive; in actuality, the opium was highly addictive as well as potent.

Realizing that Eve's revenge scheme could leave irreversible damage to the pharmaceutical world, Bryan rushed to stop Eve from releasing the spores and killing Silver, who she was with at one of his newest opium farms. After placing the spores in the farm's irrigation system, Eve shared some champagne with Silver while giving false praise to his plans before knocking him out with the champagne bottle, taping him to his desk chair before he woke up. When Silver awoke, Eve showed him pictures of Evelyn and revealed to him how she'd overdosed on the drugs he sold, accusing him of killing her and blasting him for hiding the truth about his opium's addictive quality.

Despite Silver's pleas for mercy, the wrathful Eve injected him with the same dosage of opium her sister died of, ignoring Bryan's pleas for her to stop from outside the room. After Kilroy managed to shut down the electricity to stop the spread of the spores, Eve fled the scene while Bryan injected Silver with Naloxone, stopping the effects of the opium. The episode's ending showed Eve receiving another job at the Morgan Sachs Bank, likely intending to continue her vigilante schemes. 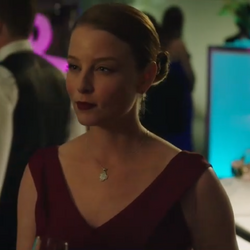 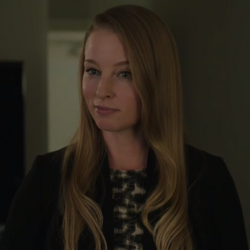 Add a photo to this gallery
Retrieved from "https://femalevillains.fandom.com/wiki/Eve_Chambers_(Taken)?oldid=165210"
Community content is available under CC-BY-SA unless otherwise noted.