The Female Villains Wiki
Register
Don't have an account?
Sign In
Advertisement
in: 1990s, Arms Dealer, Betrayed,
and 26 more

To get back her stolen laser gun

Killed in an explosion

Eve (Lesley-Anne Down) is the primary antagonist of the 1996 family action film "The Secret Agent Club".

She steals a a deadly laser gun and kills it's creator. Later Eve gathers leaders from all around the globe so that she can sell it to the highest bidder, after first stroking their desire for power. Secret agent Ray Chase (Hulk Hogan) infiltrates the meeting and manages to steal the weapon with little trouble. Having learned of this, Eve sends her metal limbed henchman, Wrecks (Richard Moll), and some other goons to retrieve it.

Wrecks catches up with Ray days later, and after failing to locate the laser gun, kidnaps the man. Eve's twisted doctor underling then tortures the agent with visions of his son, Jeremy (Matthew McCurley), screaming at him, thanks to a combination of virtual reality and drugs. Meanwhile, the real Jeremy and his clever band of friends manage to learn what has happened to Ray and take it upon themselves to free him.

Ray is indeed rescued, but very soon after, Eve manages to take his son hostage, demanding the weapon in exchange. Ray agrees, though not before jamming the gun and setting it to self destruct. A good thing, too, because the moment that Eve lays her hands upon it, she makes an attempt to kill them, but Ray and the kids escape.

Meanwhile, Eve is so perplexed as to why the gun was unable to fire that she accidentally triggers a cage trap, which drops onto her from the ceiling. It is at this moment that she finally realizes that the gun is seconds away from detonating. Wrecks shows up, and the villainess quickly scolds him to free her.

However, after her abusive and humiliating treatment of him, due to his numerous failures, the henchman decides to get some payback and insists that Eve first tell him she's sorry and it won't happen again. With no other choice, she does, and then explains that the gun must be deactivated or else they are going to die. Rather than do as she says, Wrecks runs away to save his own skin with Eve shouting after him that he's fired before the weapon explodes, killing them both. 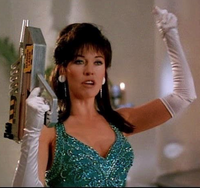 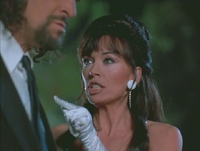 Berating Wrecks for yet another blunder.

Delighted to learn that the crooked doctor has been using "mind altering drugs" on their victim. 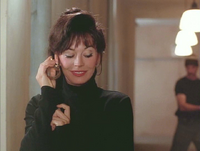 Phoning Jeremy and gloatingly telling him that she has his father... 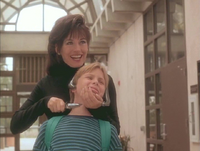 Holding Jeremy hostage in exchange for the weapon... 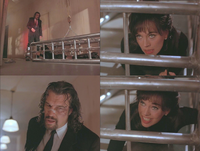 ...and then high-tail's it outta there to leave her to her doom.