Eve (Angel Boris) is the girlfriend of Broddick, a wealthy casino owner who serves as the antagonist of the 2004 low-budget, SciFi horror Boa vs. Python.

The introduction of the film shows Eve removing her mink coat and  watching a wrestling match with Brock.  Eve acts spoilt and deliberately treats the waitress rudely. She  complains that the waitress had served the wrong drink when she deliberately made the wrong order. They are seen kissing when the match ends.

Aboard Brock's private jet, she strips and is taking a bath when a snake infiltrates her bathtub. She complains to Brock and pouts before she pushes him on the bed and pounces on him. When Brock takes a phone call, she rolls over, annoyed that their love making session has been put on hold.

Eve was later constricted to death by the Boa named Betty upon stumbling in her nest and accidentally crushing one of the boa's eggs. Her death caused Broddick to descend into madness into hunting both the boa and the python.

Eve's final outfit consisted of a low-cut crop top with a military camo over a black crop top and military camo pants. She was armed with dual Glock (unknown model) handguns. 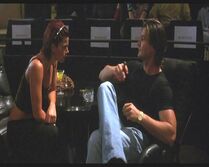 Eve with the former US Navy SEAL Sniper (left) and the Rich Texan (right, armed with the SVD Dragunov sniper rifle). 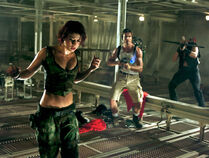 Eve with Broddick and the crossbow hunter. 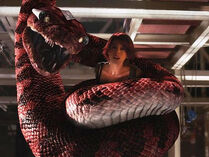 Add a photo to this gallery
Retrieved from "https://femalevillains.fandom.com/wiki/Eve_(Boa_vs._Python)?oldid=182538"
Community content is available under CC-BY-SA unless otherwise noted.