Eva Silver (original name: Eva Anna Paula Braun)  is one of the 12 Apostles of Adept in the animation The Qwaser of Stigmata, manipulation the element of mercury as a gold smelting alchemist of mercury, with the nickname “Witch of Quick Silver".

A pretty, attractive grey-blue eyed woman with light brown dull blonde hair.[1] When not in battle she wears red-rimmed glasses and pulls up her hair into a ponytail-like bun. Her attire consists of a beige blazer that exposes her breasts and a burgundy skirt, and she wears leggings. When first appeared she looks as young as in her late 20s, while after Injured her appearance got aging, and her whole body appeared covered in Bandage.

Eva was the original source of all of her clones, younger versions of herself who were given physical immortality so as to endure the atrocious tortures imposed on them by their mistress and others. They adored Eva as their only queen.

She invaded Mikhailov Academy with her clones, aiming for Mafuyu, while Sasha and Ekaterina were fighting Eva-Q & Eva-R, the real Eva Silver appeared out of nowhere in Mafuyu's class, killing their history teacher by smothering her with mercury and then proceeding to "teach" the class about the beauty of cruelty and humiliation of others (ironically also reprimanding the students about their bullying of Mafuyu). When Sasha killed Q&R, Eva herself has to confront Sasha and was initially defeated when she was crucified and set ablaze.

She reappeared shortly after she regenerate her body using the clones but gruesomely disfigured, kidnapping Mafuyu and forcing Sasha to fight once more. It was Ekaterina who shed light upon Eva's identity, unmasking her as Eva Braun, the wife of Nazi dictator Adolf Hitler. Believing her acts of depravity, especially cloning and reassimilating herself, as the true manifestation of the Nazi idea of a supreme being, she was defeated nonetheless, and completely torn apart by Ekaterina's gynoid. It is revealed that Eva is extremely fearful of death, so scared of death that she attempts to beg for her life and negotiate. A cloned corpse of Eva Silver was later used in the botched attempt, made by the Qwaser of Gold and Friederich Tanner, to summon Sword's Maria. Her position in the Adepts' hierarchy is unknown. 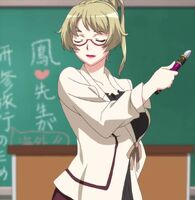 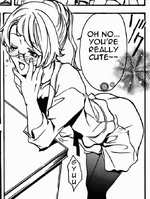 Add a photo to this gallery
Retrieved from "https://femalevillains.fandom.com/wiki/Eva_Silver_(The_Qwaser_of_Stigmata)?oldid=210508"
Community content is available under CC-BY-SA unless otherwise noted.