Start a Wiki
watch 14:21
The Loop (TV)
Do you like this video?
Eva McLadden (Vera Graziadel) is the secondary villainess in the 2009 British comedy horror film "Lesbian Vampire Killers".

Eva McLadden, was the wife of Baron McLadden, and lived in Cragswich.  When Baron McLadden returned from the Crusades, he found Eva was now a vampire with her girlfriend Carmilla (Silvia Colloca), who had turned her.  Baron McLadden vowed to kill Carmilla and make a holy sword.  With it he chopped off her head, but before she died, Carmilla promised that as he struck her down, she would rise, stronger than ever before, when she received the sacrifice of a virgin girl's blood.  Carmilla was dead, but her lover Eva, remained as a vampire, and stalked the Suffolk woods.  She received sacrifices yearly to appease her, and on the eighteenth birthday, all the women of the place turned into lesbian vampires.

Eva waited for her husband's true descendant to return to the village so she could mix his blood in with a virgins and resurrect her girlfriend.

Eva was visited by a group of four Swedish college coeds who had been studying myths and legends in Stockholm.  They had traveled to Cragwich to study vampires in their VW van.  The girls were Trudi (Ashley Mulheron) , Heidi (Tiffany Mulheron), Anke (Louise Dylan) and Lotte (MyAnna Buring).  They were joined by Jimmy (Matthew Horne) and Fletch (James Corden) who were also headed on a camping trip in the area.  It just so happened that Jimmy was a descendant of Baron McLaren.

After a night's party, two of the girls, Anke and Heidi, went to the bogs and they got turned into vampires by Eva.

Trudi gots turned to a vampire when she was taking a shower.  She suddenly heard something outside the shower curtain, and went out to investigate.  Jimmy, Fletch and Lotte, the surviving girl, ran out to see what was the problem and saw Trudi flying off as a vampire.  They followed and saw the lesbian vampires in the woods having sex.  Lotte was astounded that all the vampire legends were true, and Heidi tried to bite Fletch.  They managed to run off back to the cottage after killing the turned vampires Heidi and Anke.

The local Vicar (Paul McGann) informed the gang that Jimmy and Lotte are the key to lifting the curse, and they set out to destroy Carmilla forever.

Next time we see Trudi, she had been turned, and she attacked the Vicar.  He held her off with a wooden crucifex, but she continued to attack.  When Fletch stepped into help, Trudi's towel opened up and fell to the ground.  He was immediately distracted by her assets.  However, the Vicar told him to push her into the shower and turn on the water.  They had injected the shower water with holy water.  The only thing he could grab onto was Trudi's breasts, and he pushed her back.  The Vicar encouraged Fletch to keep her under the water so that she wouldn't get away.  Fletch continued to hold her there with her mounds, and slowly her skin began to shrivel up.  Finally there was an explosion, and there was white slime covering the shower stall and floor.  Fletch was left holding the only thing left of Trudi, her giant breast implants.

After finding McLaren's sword, they went to the cemetery to dig into his grave.  On the way the vicar's daughter Rebecca (Emer Kenny) appeared and tried to seduce Fletch, but then revealed herself to also be a vampire.  She was inadvertently impaled by the sword as a result.

They reached the cemetery just as the Moon bled, and saw the lesbians preparing to resurrect Carmilla.  They cut Lotte and her blood formed a portal for the Vampire Queen to rise from.  She rose, and eventually stood there.  She was more powerful than ever before, as she now had horns.  Eva approached and kissed her, and then the vicar tried to kill them all, but Carmilla ordered his execution.

Lotte, Jimmy and Fletch ran from the lesbian vampires, and eventually were seperated.  Lotte ended up fighting Eva who was going to bite her.  She eventually decapitated Eva with a cross after pretending to be seduced by her.  Then Carmilla showed up, enraged, and kidnapped Lotte.  She challenged Jimmy, and just as she was about to kill him, Jimmy threw his ancestor's sword at Carmilla, who disintegrated into electricity and exploded.

The next morning, all the lesbian vampires still alive had been freed of the curse, but they were still lesbians. 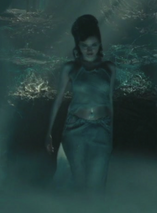 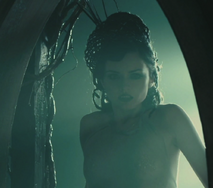 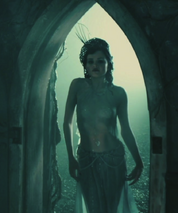 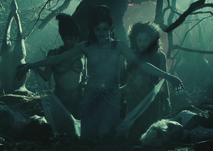 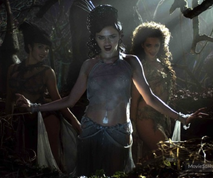 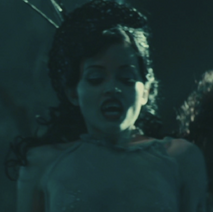 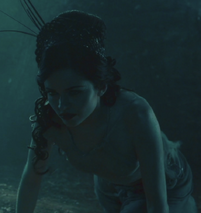 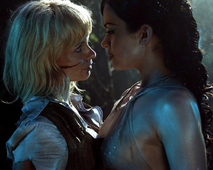 Add a photo to this gallery
Retrieved from "https://femalevillains.fandom.com/wiki/Eva_McLadden_(Lesbian_Vampire_Killers)?oldid=161685"
Community content is available under CC-BY-SA unless otherwise noted.