Start a Wiki
watch 01:51
The Loop (TV)
Do you like this video?
Eva Marie is a professional wrestler best known for competing in WWE, where she portrayed a villainess.

Eva Marie debuted on Raw on July 22, 2013, as one of the two newbies on Total Divas, and delivered a slap to WWE Hall of Famer Jerry "The King" Lawler in an attempt to make a name for herself. She later aligned herself with the Bella Twins, mainly as part of Brie Bella's feud with Natalya. In 2014, Eva Marie was one of the many Divas enlisted by the evil Stephanie McMahon to punish Nikki Bella for her sister's actions towards Stephanie at the Payback event (Brie slapped Stephanie's face after she walked out of WWE).

After a lengthy hiatus and heavy training to improve her wrestling skills, Eva Marie made her return to action on the July 22, 2015 episode of NXT, where she defeated Cassie. As part of her new persona, Eva Marie entered donning a long red robe, which she would slowly remove once she enters the ring. In the weeks that followed, the evil Eva Marie picked up victories over numerous Divas, while later forming an alliance with the villainous Nia Jax. In November, Eva Marie received her first opportunity at the NXT Women's Championship, losing to Bayley despite Nia Jax's involvement. The villainous pair continued their feud with Bayley and Carmella, which included defeating the duo on the February 24, 2016 episode of NXT.

On July 19, 2016, Eva Marie was drafted to the SmackDown roster as part of the returning Brand Extension. Eva turned heel on the following week's edition of SmackDown, when she upstaged the rest of the SmackDown women during their entrances. Eva Marie's heel persona included a voiceover introduction in her entrance, and in the following weeks, she was supposed to make her in-ring debut, only to create unfortunate events to get out of competing. 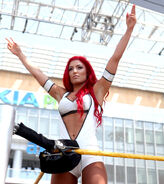 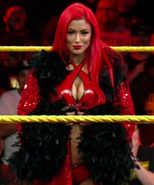 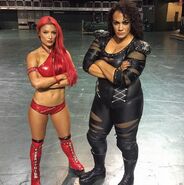 Eva Marie with her ally, the evil Nia Jax 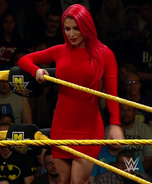 Eva Marie blowing a kiss to the SD Women's Division

Challenging Bayley on NXT. Getting booed by crowd.

Bayley cringes as Eva Marie tries to work the crowd

Nia Jaxx bailing her out as usual

Without the dyed red hair 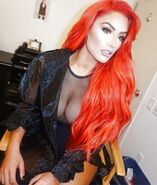 Posing for a shoot 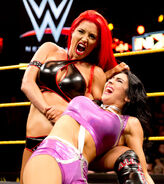 Retrieved from "https://femalevillains.fandom.com/wiki/Eva_Marie_(WWE)?oldid=153253"
Community content is available under CC-BY-SA unless otherwise noted.