Eva Grubb is an insecure "Plain Jane" who left civilization and headed to the island to be alone for the rest of her life. Eva was unaware that the island was actually inhabited, and she would learn this when she runs into The Skipper and Gilligan. Eva tells Skipper that they can have the boat, as she had no plans of ever leaving the island.

Eva then told Skipper and Gilligan her story; that she wanted to get away from everyone, especially men, after she was stood up on a blind date. Eva saved up to buy a boat so she could get away from civilization, and she handed Skipper the keys. After introducing Eva to the rest of the castaways, the group planned to take Eva with them off the island, but they had to keep it secret from her, figuring that she was dead set on remaining on the island. Their assumption turned out to be true, as Skipper, Gilligan, and Professor noticed that the spark plugs were missing, and at that moment, Eva appeared and stated that she took out the spark plugs after Gilligan told her that they planned to take her off the island with them.

Ginger and Mary Ann come to the conclusion that what the insecure Eva needs is a beauty makeover to build her confidence. With a special shampoo the Professor created (which acted like hair dye), makeup and a new dress, the result has Eva being a dead ringer for Ginger, much to the surprise of all of the women, most of all Ginger. Eva doesn't believe that she could actually look like Ginger, until she looks at herself in the mirror and notices the resemblance after taking her glasses off (Eva couldn't see without them). With her brand new look, Eva gains a load of confidence, and later made an impression on Gilligan as well. She later found the keys and returned the spark plugs to her boat, and was now eager to leave the island and return to civilization.

Eva listens in on a conversation between Ginger and Mary Ann, which is about how Eva will adapt to the world with her new look. Ginger stated that Eva now has poise and sex appeal. That evening, Eva meets Ginger to thank her and the others for what they've done for her.

Later, Eva turns heel and knocks Ginger out with a coconut. Eva then gagged and tied her up, and revealed her evil plan to get off the island with the rest of the castaways, leaving the real Ginger behind alone. She then rejoins the group at a farewell gathering.

To keep them from finding out the truth, she keeps changing clothes during the gathering. While dressed as Ginger, however, Eva's glasses are broken by Gilligan while the pair danced, and the real Ginger appears and reveals Eva's evil plan. Eva apologized for her actions and asked to be forgiven.

In the end of the episode, Eva left the island on her boat. The group had figured that Eva had left, and it was confirmed when they only found a note while looking for her. As the note stated, Eva expressed pride in fooling the castaways into believing that she was Ginger, and she believed that she could convince everyone else of that as well. She also wrote that she is now on her way to start her career in Hollywood, and even went as far to sign the note: "The New Ginger Grant."

Ginger is devastated, and when Gilligan mentions having some grub, Ginger said: "Don't you ever mention that girl's name again!" 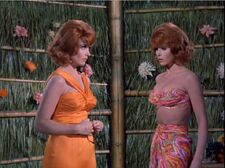 Eva Grubb (left) after her makeover, standing next to Ginger (right) 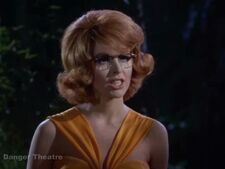 Eva revealing her evil plan to Ginger
Add a photo to this gallery
Retrieved from "https://femalevillains.fandom.com/wiki/Eva_Grubb_(Gilligan%27s_Island)?oldid=203640"
Community content is available under CC-BY-SA unless otherwise noted.